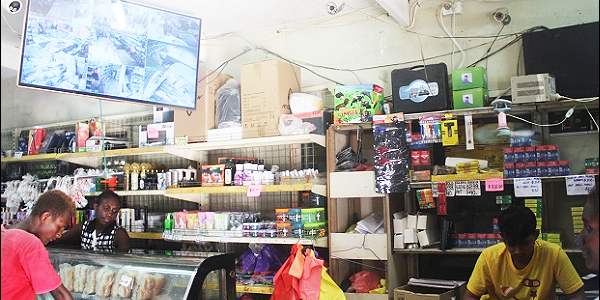 A young man in his 20s has been arrested after he broke into a Bangladeshi-owned shop and walked away with a huge amount of money including other valuable items.

It is estimated that around $14,000 was removed including some items and 10 mobile phones.

Gizo Police have arrested the man the same day, he was charged and remanded.

The arrest was made last Thursday, at the KHY compound where the man was located, after a Police investigation.

The incident occurred around 1:15 am at the Gizo District Town, Western Province.

This paper was told that the accused gained access through the rooftop of the building. He then broke open a small window and entered into the shop.

While inside, he helped himself looting cash and coins, sleeves of cigarettes, Solbako products, and a number of mobile phones.

In an interview with the shop owner, Anoa Jononi, the man was armed with a weapon and a torch light when he entered the building.

“Our CCTV camera has picked up that the man crawled his way into the building.

“At first, he was wearing a black mask. He later removed the mask when he was making his way towards the counter to collect the items,” Jononi said.

When asked if the thief noticed the CCTV camera in the shop, the owner said he did not even notice the camera was there.

It was then that the police was able to identify him which resulted in his arrest.

Jononi said he noticed that the shop was looted in the morning of Thursday.

Police only managed to recover some notes and coins but the rest was already being used by the accused, the shop owner said.