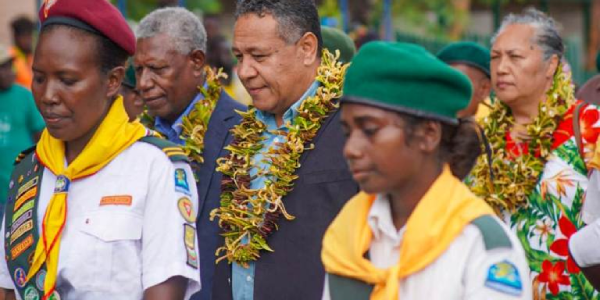 MEMBERS of the Seventh Day Adventist (SDA) Church in and around the Western Provincial capital of Gizo were graced with the presence of Trans Pacific Union Mission (TPUM) President over the weekend.

Pr. Maveni Kaufononga and his wife Anne Kaufononga arrived in the country last Tuesday for a weeklong tour.

The visit was to see the ongoing progress of work by the church.

While in Honiara he spoke with most of the church workers and find out from them the challenges and achievements they have made.

He also had fellowship session with the church officials.

He also conducts devotion for PM Sogavare and his Cabinet on Thursday morning.

On Friday morning Pr Maveni, his wife along with the Solomon Islands Mission (SIM) President Dr Silent Tovosia and wife flew over to Gizo where they spent the weekend with the members of the congregation there.

Upon arrival at the Nusa Tupe airport in Gizo, the delegation was welcomed by the officials from Adventist Church Western sub-region office based in Kukudu.

From the airport, the delegation traveled onboard the only surviving mission boat MV Varivato to Gizo where a welcome parade was mounted by the Pathfinders and church leaders.

The TPUM President and his wife acknowledged the warm welcome.

On Friday night, Pr Maveni led out in the sermon at the JF Kennedy Stadium where hundreds packed to listen. Others watched online to listen to God’s words.

On Saturday (Sabbath) morning he witnessed the baptism of 19 souls who gave their lives to Jesus. The baptism ceremony was held at Suvania in West Gizo.

Mr Maveni then took the main sermon during the Sabbath’s Divine Service.

These included church officials from the Western sub-regional headquarter in Kukudu along with staff and students from Kukudu Adventist College (KAC).

They traveled over to Gizo onboard MV Varivato to be part of the combine.

After lunch, the congregation were updated on the church work at the SIM and TPUM level by the two presidents.

Pr Maveni then concluded the two weeks crusade at the JF Kennedy stadium on Saturday night with a powerful message about Heaven.

The students graced the weekend’s program with their lovely singing.

Yesterday a picnic was held at a nearby island where the visiting delegation and members of the church participated.

Pr Maveni is expected back in Honiara today and will be speaking to the Adventist congregation in the city this evening at a combine service.

He and his wife returns to Fiji tomorrow.

Its his first visit to the country after the international borders have reopened.

TPUM is a comparatively new Union Mission, being inaugurated by Church action (through the South Pacific Division) at the beginning of 2001.

It is staffed by a team of dedicated international people who are committed to the Union Vision and ministry.

With about 135,000 church members, there are eleven nations that are part of the TPU region. There are two attached churches in Nauru and Niue, and one attached field in Tuvalu.

Missions in this Union are in American Samoa, Fiji, Kiribati, Samoa-Tokelau, Solomon Islands, Tonga, and Vanuatu.

The TPUM is also directly responsible for a number of institutions throughout its field. It runs Atoifi Hospital in the Solomons, and its primary Tertiary Education Facility, Fulton Adventist University College, is located in Nadi, Fiji.

The TPUM offers many kinds of Ministries and is the administrative headquarters of these missions and institutions.

It is of course a part of the South Pacific Division of the Seventh-day Adventist Church, which in turn is a part of the entire World Church, headquartered in Maryland, USA.