TROOPS’ PRESENCE USHER IN LULL IN LOOTING AND DESTRUCTION 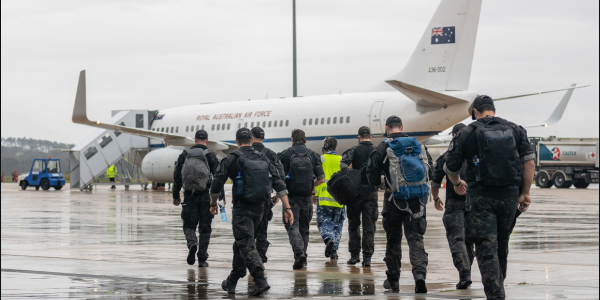 TROOPS’ presence in Honiara has ushered in a much welcomed lull in the looting, rioting and destruction of properties.

A 23-man police contingent from Australia arrived Thursday night. They have since been deployed to Chinatown – one of the worse scenes for looting and destruction of properties in the last three days.

According to sources, Australian soldiers would be deployed around the Airport area. It is understood there are 40 Australian Defence Forces soldiers, including auxiliary troops that arrived Friday afternoon.

Their deployment is made under the Bilateral Security Treaty Solomon Islands and Australia signed in August 2017.

PNG soldiers that arrived yesterday would be deployed in town. The troops are reportedly being led by the PNG Police Commissioner. Their deployment is facilitated under a standing arrangement entered into with the PNG Government in 2015.

The joint intervention by Australian and PNG troops, however, may have come a little too late to save Prime Minister Manasseh Sogavare’s government. Mr. Sogavare is believed to be in hiding, having boarded a charter flight on Thursday morning.

At least three Members of Parliament have either resigned or have indicated their intentions to leave the DCGA government, citing their leader, Prime Minister Sogavare’s decision to ignore calls for his resignation as the reason for their departure.

They are the MP for Malaita Outer Islands (MOI), Martin Mokolo Kealoe, the MP for West New Georgia, Silas Tausinga and the MP for East Kwaio, Stanley Festus Sofu who told about 200 East Kwaio voters yesterday of his intention to resign.

Two other MPs, Central Kwara’ae’s Jackson Fiulaua and North Malaita MP, Senley Levi Filualea are reported to be considering their position with the government. Hon Filualea is the Minister of Agriculture and Livestock.

According to those who attended his gathering yesterday, Hon Sofu, told them he intended to put in his resignation on Monday after he returned from burying his brother, the late Hon Titus Fiika who died in Honiara last Friday.

Hon Sofu reportedly told his audience at Kobito yesterday he was expecting to see Prime Minister Sogavare do something about the calls for his resignation but it now appeared he was unwilling to do anything.

“I will go and bury my brother first and when I return on Monday I will submit my resignation in writing,” Hon Sofu who is also the deputy Speaker of Parliament, told Kwaio voters who pressed his resignation.

Meanwhile it was reported that two United States envoys are in Honiara, monitoring the rioting, looting and destruction of properties.

“They are reporting events back to Washington DC,” a source told Solomon Star.

The November 2021 uprising is the third in a decade – the first being in June 2000 when armed militants removed then Prime Minister Bartholomew Ulufa’alu from Office under the barrel of the gun.

The third happened in about April 2006.

This year’s uprising proved to be the worst in terms of the destruction and the impact this will have on the nation’s struggling economy.

Thousands of Solomon Islands’ nationals are expected to lose their jobs as a result of the destruction, which included the torching of a branch of the PNG-owned Bank South Pacific at Ranadi on Thursday evening.

Shops and speciality outlets have also been destroyed.