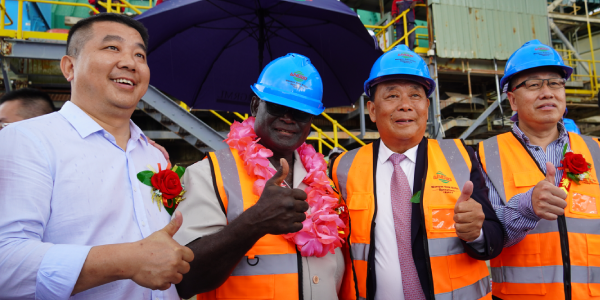 MEMBER of Parliament for Central Guadalcanal where Gold Ridge mine is located, Peter Shanel Agovaka, has demanded the Gold Ridge Mining Limited (GRML) and its directors to provide reports of the mining operation and explain the shareholding arrangement for landowners.

Peter Shanel made the demand at the official ceremony yesterday to marking the official re-commencement of mining at the Gold Ridge Mine which is  one of the flagship policies of the Democratic Coalition Government for Advancement (DCGA) which he is part of.

A number of high-level overseas delegates as well as Prime Minister, Manasseh Sogavare and other Cabinet Ministers, GRML’s overseas representatives, foreign diplomats and landowners were part of the ceremony.

Under the operation, the Chinese investor – Wanguo International Mining Group Limited- owns 90 percent of shares in the mining operation, whilst the remaining 10 percent is given to the Gold Ridge Community Investment Limited (GRCIL).

And it was this ten percent share that MP Agovaka demanded the directors of GRCIL to clarify to the landowners.

“Where do the landowners sit on the ten percent share,” he asked.

He also asked the two directors of GRCIL why there were no annual reports and operational reports.

“The landowners need to know about the progress of the investment,” he said, adding, “There was never an Annual General Meeting (AGM) since the start of preparatory work.

“I call on GRML to produce these annual reports.

“So that you directors tell us what is happening. That is very important,” he added.

MP Agovaka who is also the Minister of Communication and Aviation used the occasion to call for cooperation and partnership between the company and landowners.

“Without it (cooperation), we cannot work together. We need to cooperate. Landowners and the company must cooperate.”

MP Agovaka added, there are nagging issues affecting many individual settlers and landowners and it is important for the company to look at them.

“Do not reject these landowners and do not ignore their concerns and everything will be okay.”

He assured GRML that as part of the Government and Cabinet, he will be there speaking on behalf of the company when things affect them.

“I will fight for Tina Hydro and Gold Ridge the two big projects in my constituency.

“Thank you and continue with the good work and hopefully, we can all celebrate the Christmas and New Year,” he said.

Member of Parliament for North Guadalcanal, Samson Maneka, who also spoke at the ceremony said it is important for the company and government to recognise the downstream landowners so they can also benefit through royalty.

“Because without the tailings dam, there would be no mining,” he said.

Prime Minister, Manesseh Sogavare, in his speech acknowledged MP Agovaka for fighting for the landowners by raising their concerns.

“We hear you loud and clear,” he said.

“On behalf of the Government, I thank MP Agovaka and landowners for the various investments that are located within your constituency,” the Prime Minister added.

Prime Minister Sogavare assured the Central Guadalcanal MP and landowners that there is a new partnership in place to address their issues.

“The only assurance is that we have a new partnership in place and they will look at the welfare of the landowners,” he said.

On that note, the Prime Minister encouraged everyone to work together.

“We can only move forward if we work together. Of course, we will have disagreements but we need to sort them out. Do not leave them unresolved.

“The Government stands ready to work together to work with all partners.