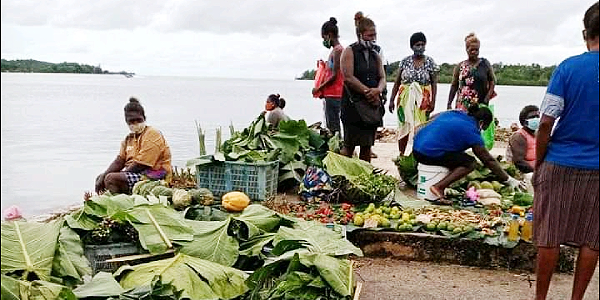 DUE to strict measures imposed at the Gizo main market in Western Province where only fully vaccinated market vendors and customers can use the main market, unvaccinated vendors have resorted to using another public spot in Gizo, to sell their produce.

Some of the unvaccinated vendors who traveled from the nearby islands are now using the KHY Buni spot to sell their market produce.

Even though Gizo Police has restricted the site not to sell betel nut and other products, unvaccinated fish vendors and market vendors are now using the site.

This is because there is no other option, they said.

They told the paper, they need to earn some money to support their families in this current challenging time.

Several market vendors especially women from Vella, Rannoga and Simbo have expressed their concern about the need to access market facility.

They said since the rule of ‘no jab, no market’ was introduced, it had given them a difficult time to earn and income to support their families during this pandemic where people are struggling to survive.

A woman usually sells her market produce at the Gizo market in the past but was denied access now because she was unvaccinated said they are now forced to sell their market produces on the cement floor at the seafront.

She said they will not give up because they need to earn money to support their families.

“At least we can able to find any space to sell our produce,” she said.

The new policy plus the reduced number of days to sell at the Gizo main market is giving a headache to many vendors.