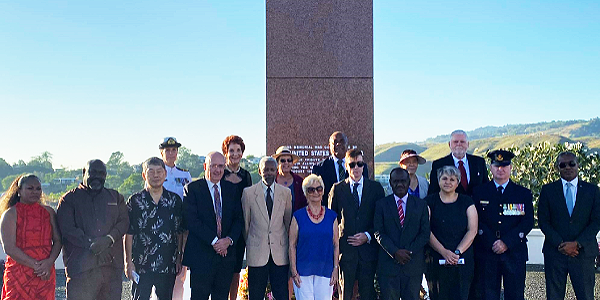 The United States and the Solomon Islands share an intimate history, forged in blood and mud on the hills of Bloody Ridge, on the surrounding seas, and on beaches and forests throughout this remarkable nation.

US Ambassador Erin McKee said in her speech which was read by CA Keithie Saunders on the 7th August to mark the 79th anniversary of the Battle of Guadalcanal.

“Today we mark the 79th anniversary of the Battle of Guadalcanal, one of the most significant events of World War Two.

“The events of those difficult days would prove to be the turning point in a conflict that engulfed the planet,” she added.

Ambassador Erin McKee further added that it was here, a lifetime ago, that Americans, Solomon Islanders, and our Allies, developed a bond of mutual respect, under the most difficult circumstances imaginable.

Those battles led to an extraordinary partnership between the United States and Solomon Islands that we look forward to expanding in the years ahead with the help of your Pacific neighbours.

“Today we remember the soldiers, sailors, airmen, and coast watchers who served. We remember their bravery, their suffering and sacrifice, and their ultimate victory in protection of democratic values.

“For decades, American engagement and partnerships here, and in the greater region, have protected our shared values of freedom, individual rights, goodwill, and mutual respect across the Indo-Pacific region,” she added.

She said it remains a fundamental priority for the United States of America to enhance our regional partnerships so that the people of Solomon Islands benefit from an environment that promotes partnership, not rivalry; prosperity, not dependence; security, not domination; opportunity, not threats.

Solomon Star understands that the event was attended by the Minister for Foreign Affairs and External Trade with other dignitaries.