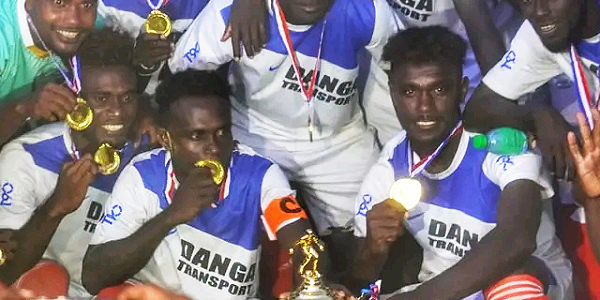 Vella United is the newly crowned champion of the Western Province Inter-Island Soccer Championship (IISC) 2022 that ended tonight at the JFK Stadium in Gizo Western Province.

Both teams fought hard during the full 90 minutes but in the end, Vella celebrated the victory after a good and tough match against Noro Town.

The competition went straight into its official presentation for the top teams after two matches of the round pool games of the tournament.

Speaking during the closing ceremony at the presentation, Western Football Association (WFA), Vice Chairman, Adrian Masa thanked all the 12 participating teams from the surrounding islands in Western Province.

Adrian Masa said it could be a quite special and challenging for the upcoming Solomon Cup for us.

‘’It is because we are not going as a participants but as the cup holder defender of the Solomon Cup.

‘’And that would be an extra pressure for those of you are selected, you have the responsibility to carry pride of Western Province Football.

‘’For those of you that will be selected to form the new Western Tomoko, I do hope that you will not only represent yourself, but represent the people of Western Province.

Chairman of the Local Organizing Committee (LOC), Kalwin Aquillah said to host such tournament is a bit challenging concerning the financial assistance but thanks to the main sponsors.

Mr. Aquillah said the prizes may not be conducive to your expertise but this what we sacrifice.

He said to other teams that dropped out during the league, that this is not the end. And he urged them to keep up the good sportsmanship and that their time will come, so play hard.

Names of those who were selected for the trials for Western Tomoko were also announced during the presentation.

The major sponsors of the tournament are Solrais, Our Telekom, Gizo High School and the Western Provincial Government (WPG).