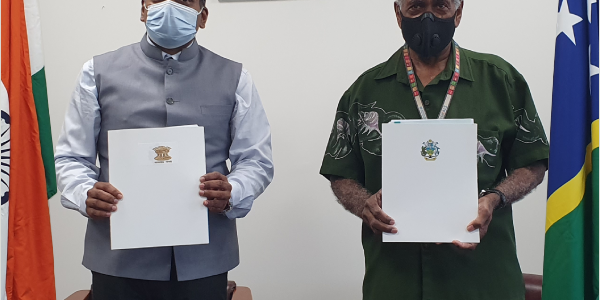 SOLOMON Islanders traveling to India will no longer require a Visa, after the signing of an agreement on Exemption from Visa Requirements for Holders of Diplomatic and Official Passports between India and Solomon Islands.

This will be the same for Indians traveling into Solomon Islands.

In a statement, the Ministry of Foreign Affairs and External Trade  described the five-day visit of the new Indian High Commissioner to Solomon Islands to Honiara as successful.

He also held meetings with the Permanent Secretaries of the Ministry of Health and Medical Services, Ministry of Commerce Industries Labour and Immigration, Ministry of Forestry and Research, Ministry of Agriculture Livestock Development, Ministry of Education Human Resource Development and representatives of Solomon Islands National University during which they deliberated on matters of mutual interest and possibilities of enhancing the relationship between the two countries.

The High Commissioner reiterated during the meetings that the Indian government’s key priority for partners like Solomon Islands is to focus on human resources’ capacity-building.

Thus, to solidify the bilateral engagement between India and Solomon Islands and promote more people to people exchanges between their citizens, the visa agreement was signed.

“Solomon Islands Government recognises the strength and potential that India can bring to prosperously enhance the SI-India bilateral relations and stands ready and committed to work with the Indian Government on matters of mutual interest and solidarity,” the government statement said.