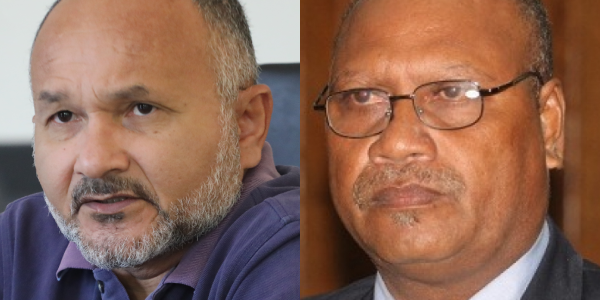 THE DCGA government wants the Malaita Provincial Premier Daniel Suidani and the Opposition leader, Mathew Wale arrested to silence them from talking sense as leaders.

Wale revealed this to the audience at the Auki Central Market Tuesday this week, adding that the DCGA government is focusing more on further dividing the country.

The outspoken Opposition leader said DCGA claimed that Premier Suidani and himself are involved in burning Chinatown in the 2021 November riots.

He claimed that poor leadership in the DCGA government also divided the police force to a point that police only followed DCGA orders.

“The DCGA focus now is to arrest the Malaita Premier Daniel Suidani and the Opposition leader.”

“They claimed Suidani and Wale burned China Town in the recent riots.”

“Instead of focusing on good doing to create jobs, they are focusing on arresting Suidani and Wale to further divide the country.”

“Why planning to arrest the Premier and Opposition leader?  Because they are the two RAMOS’ (Aggressive) leaders of Malaita who are doing all the sensible talking at the moment.”

“The arrest is to silence the Premier and the Opposition leader from exposing their poor leadership.”

“They are much more interested in things that will divide us.”

Wale went on to claim that the DCGA also caused division in our police force and that is a direct result of bad leadership.

He said the Royal Solomon Islands Police Force (RSIPF) will be affected if election is denied for another year.

Wale said DCGA will spoil the rule of law in the country.

“With pressure from DCGA, Police don’t follow evidence in the recent riot to conduct arrests, rather they are only following political direction from DCGA to do arrests,” the Opposition Leader stated.