You are here:
Features - Women 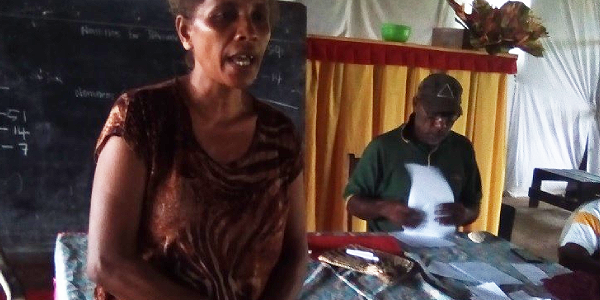 A WOMEN’s council had been formed in ward 15, eastern region of Malaita Province last week.

The establishment of the women’s body was hailed as a history for women in that region to finally register its own council and become a member of Malaita Provincial Council of Women.

The new set up was also described as a pride that reflected the continuous work of empowerment in recognising the importance of women in Malaita.

Speaking at the launching ceremony President of Malaita Provincial Council of Women Martha Rurai acknowledged the partnership of Ward 15 Development Committee and responsible Member of Provincial Assembly (MPA) to advocate and recognising the importance of setting the council of women in ward 15.

She said the provincial council of women aims to establish similar ward council for rural women in all 33 wards in Malaita.

“But this can only be possible if all 33 MPAs in Malaita Province can work together.”

The establishment of the new council also saw the appointment of a new executive.

Ms Rurai said that these establishments are welcoming news for women as rural women in Malaita can now have link to the provincial council of women.

She said such set up is a start pointing in involving women in rural Malaita to be part of council’s responsibility to advocate and receive benefits.

Member of the Provincial Assembly (MPA) for ward 15 Edward Misite’e said having a women council in the ward is a history which they will now have a link with the Malaita Province Council of Women under the Recognized Institution of Development Program.

“This is a new chapter for you all woman of ward 15 to have hope of development priorities that will allow you to participate in every program that will be organize by the newly elected body through the collaborative link with the Malaita Council of Woman and other stakeholder organization programs,” Mr Misite’e said.

He assures women in ward 15 that his Ward Development Committee is committed to support the newly established body.