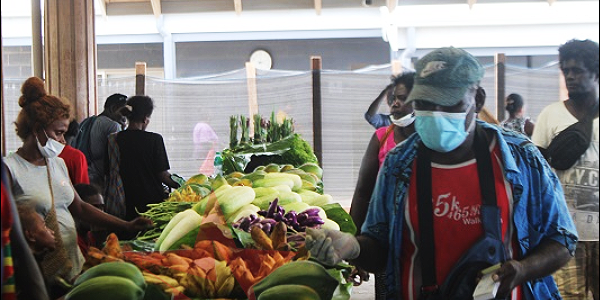 WESTERN Provincial Government (WPG) is planning on to request the Government to gazette an order to ensure wearing of masks becomes mandatory in the province.

This was revealed by the Western Provincial Disaster Committee (PDC) Chairman Jeffrey Wickham.

This proposal was agreed on after a meeting was held between the PDC and Provincial Health Emergency Operations Committee (PHEOC) at the MSG building on Monday in Gizo.

Mr Wickham speaking to the paper said they will request the Oversight Committee to grant and gazette another order purposely for wearing of facing masks.

“We want to see wearing of face masks to become a compulsory and must be worn in every public and private area.

“Anyone that did not comply with the order, will be arrested and charged for breaching the rule.

“It is very important that we need to have more emphasis on wearing of face masks in our communities,” he said.

He said a lot of communities are neglecting the some of the rules that are given, make it worse many did not care about wearing of facemasks.

Mr Wickham added with the spread of the virus on the increase and by looking at the capacity of the health authority inside the province it cannot cover the whole communities in Western Province.

He said it’s going to be a nightmare in trying to contain the virus from spreading further into the communities.

“So the only option to contain it is to totally ban or get an order to ban inter-traveling for a certain period of time,” Wickham added.

He further added that during his recent trip in Marovo and other communities in Western Province, there are people not wearing masks. “This shows how people did not take the virus seriously although the virus is a threat that can take lives especially those at the vulnerable age.”