WHO IS MA LI PING? 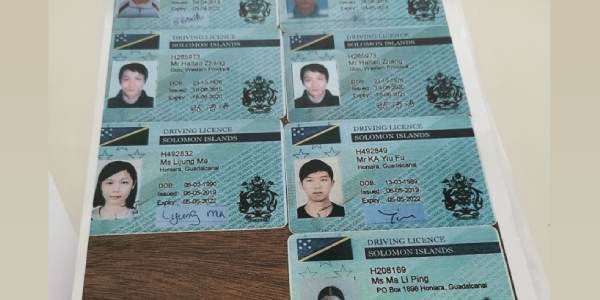 IF you are outside the circle of the corridors of power in Solomon Islands, you may never cross her path. Equally, you may never run into her if you are below the echelon of business and commerce in Honiara.

Ma Li Ping is very powerful woman indeed. Although she has been here for the last 17 years or so, Ms. Ma never speaks Pijin. But the language barrier is not a limitation, when it comes to making business connections, legitimate or otherwise.

Ma is suspected of running a money-laundering operations. She travels on two Chinese passports – one expires in 2025 and the other is due to run out in 2032..

In addition, she obtained six Solomon Islands Driver’s Licences for six Chinese nationals including her own. While she lives in Honiara, the other five do not – a question mark on those who issue driver’s Licences.

The Licences are used as proof to send money overseas. Solomon Star has obtained copies of the Licences.

Documents and physical actions show Ms. Ma’s business circle has links to Police, Labour, Immigration and even to the Papua New Guinea troops serving in Honiara under the security arrangement to protect Solomon Islands citizens living in Honiara.

Banks and at least one social group are also in her circle.

On Thursday morning last week armed PNG soldiers, members of the CID from Honiara Central Police station and a group allegedly calling itself TUITA raided Suresh’s residence, disconnected his CCTV camera and had a field day.

In all  there were more than 14 armed PNG soldiers, about seven CID and about four from the Tuita group, according to eye witnesses.

“I know they wanted to kill me . I also know it was Ma who directed the group to enter my private residence. The PNG troops, using rifles butts, smashed the door to my bedroom and ransacked my wardrobes. More than $240, 000 in cash was missing.

“For some reason the room next to my bedroom was not ransacked although the door was broken. That room was my office,” Suresh said.

“I am exposing this so that should anything happen to me, people will know who is responsible,” Suresh said.