WHO IS RESPONSIBLE FOR THE CITY’S CLEAN-UP? 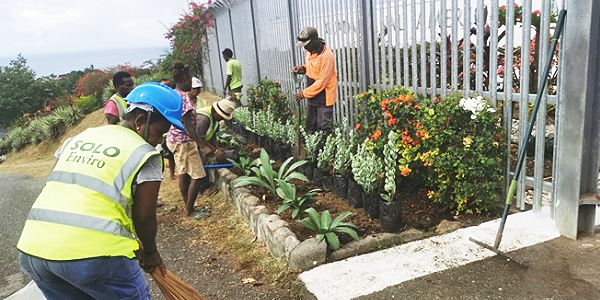 IN a few days, Solomon Islands’ capital Honiara will be swarmed by foreign and provincial visitors for the 80th Anniversary of the landing of Allied Forces on Guadalcanal.

An estimated 200 foreign visitors – largely from the United States, Japan and Australia and New Zealand will join us for the celebration.

The US Ambassador to Australia, Caroline Kennedy, daughter of JF Kennedy whose PT-109 boat was sunk in the Western Province during the War, will be amongst the War Veterans and dignitaries who will be here.

The Guadalcanal American Memorial at Skyline is a living memory of those who fought for our freedom.

But the road from lower Mbokonavera to the Memorial is littered with car wrecks on both sides of the road, making it almost impossible for moving vehicles to pass through.

Who is responsible for clearing the rubbish? Is it the Honiara City Council? Given the road leads to and from the Memorial and the importance of the Guadalcanal American Memorial, it should have been the focus of the City Council.

When Solomon Star drove up to the Memorial on Monday, the only people who were busy cleaning around the perimeter are young people who clean up the area once every two weeks.

The Guadalcanal campaign, also known as the Battle of Guadalcanal and codenamed Operation Watchtower by American forces, was a military campaign fought between 7 August 1942 and 9 February 1943 on and around the island of Guadalcanal in the Pacific theater of World War II, according to entries in Wikipedia.

It was the first major land offensive by Allied forces against the Empire of Japan.

Casualties and losses on both sides were record as:

The campaign is celebrated on 7th and 8th August every year.

On that day, the 7th of August 1942, Allied forces, predominantly United States Marines, landed on Guadalcanal, Tulagi, and Florida with the objective of using Guadalcanal and Tulagi as bases in supporting a campaign to eventually capture or neutralize the major Japanese base at Rabaul on New Britain in Papua New Guinea.

The Japanese defenders, who had occupied those islands since May 1942, were outnumbered and overwhelmed by the Allies, who captured Tulagi and Florida, as well as the airfield – later named Henderson Field – that was under construction on Guadalcanal.

Surprised by the Allied offensive, the Japanese made several attempts between August and November to retake Henderson Field. Three major land battles, seven large naval battles (five nighttime surface actions and two carrier battles), and almost daily aerial battles culminated in the decisive Naval Battle of Guadalcanal in early November, with the defeat of the last Japanese attempt to bombard Henderson Field from the sea and to land enough troops to retake it.

In December, the Japanese abandoned their efforts to retake Guadalcanal, and evacuated their remaining forces by 7 February 1943, in the face of an offensive by the U.S. Army’s XIV Corps, with the Battle of Rennell Island, the last major naval engagement, serving to secure protection for the Japanese troops to evacuate safely.

The campaign followed the successful Allied defensive actions at the Battle of the Coral Sea and the Battle of Midway in May and June, 1942. Along with the battles at Milne Bay and Buna–Gona, the Guadalcanal campaign marked the Allies’ transition from defensive operations to offensive ones and effectively allowed them to seize the strategic initiative in the Pacific theater from the Japanese.