WHO IS THE IMPREST HOLDER? 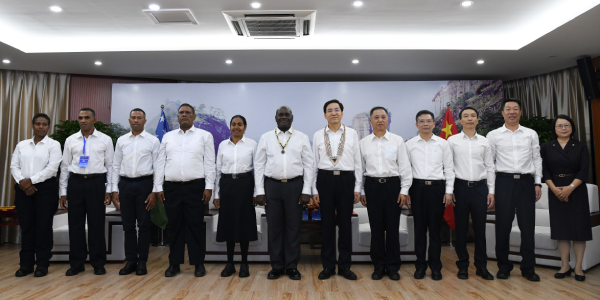 POLICE have begun an internal investigation into who might have leaked the information to the media about four Executive Members who traveled to China with police officers last month.

Sources told Solomon Star the formal investigation would begin today when each police officer who traveled to China for advanced crowd and riot control training would be interrogated.

“The Executive is so embarrassed that they are now on a witch hunt to find the culprits. But the police officers are prepared to confront their bosses regardless of who will lead the investigation,” sources familiar with the issue told Solomon Star last night.

“It’s going to be one hell of a fight because the officers are prepared to ask the hard questions of their bosses. In particular, they want to know who the Imprest holder for the trip was,” the sources.

Solomon Star has established that there were in fact two Imprests that were provided – one valued at $50, 000 was given to a sergeant who traveled on the trip. It was intended to buy presents such as shell money to reciprocate giftings at ceremonies in China.

Solomon Star has also learned that only $10, 000 was given to the unnamed sergeant, who has confirmed having received it. The balance of $40, 000 was allegedly held back by members of the Executive who were on the trip.

“Where that money was spent and by whom no one seems to know,” the sources said.

But there is an even bigger Imprest that a member of the Police Executive was carrying on behalf of the 32 members of the group.

They also made comparison with Police Commissioner Mostyn Mangau who traveled to India two months ago. He carried with him an Imprest of USD10, 000 (about SBD89, 000). This is an Imprest for one man for just two-weeks.

“Just imagine the 28 police officers and four executive members of the police in the group that traveled to China. How much could the Imprest for this group worth? And they were there for a month,” the sources said.

“What made the police officers so angry was that when they asked for their share in the Imprest, their request was denied. They felt so ashamed when members of the executive were carrying large shopping items.

“Where did they get the money from,” angry police officers asked.