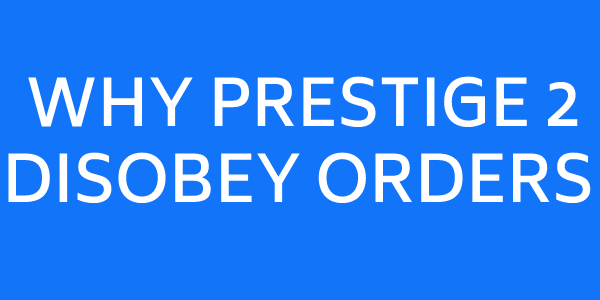 BILLY MAMALONI – the Captain of Solomon Prestige2 the vessel embroiled in the controversial trip to Ontong Java two weeks ago, has given details of the trip in an exclusive interview with Solomon Star.

It was on the morning of February 16, he said, that two boarding officers from the Maritime and Rescue Operations Centre (MRTC) boarded the Solomon Prestige2 at Point Cruz wharf to perform a formality known by seafarers as pre-departure check.

According to Capt Mamaloni, the pre-departure check was to check crew members in preparation for the journey.

Capt Mamaloni is a qualified Captain as a seaman. He is a senior lecturer at SINU’s Marine School at Ranadi and is on hire to sail the vessel, Solomon Prestige2, while SINU is in recess.

And so by 5pm on Wednesday 16 February, Solomon Prestige 2, departed Honiara for Ontong Java. The next day, when it was just 33 miles or 52.8km from the first port on Ontong Java Capt Mamaloni received a call ordering Solomon Prestige2 to return to Honiara immediately as its trip to Ontong Java was not cleared.

“Here I was 164.7 miles or 263.52km from Honiara and only 52.8km from Ontong Java and I was being ordered to turn back. I refused. I told them that I would be willing to face authorities on my return. I actually took the humanitarian side because I was carrying food and medicine for the people of Ontong Java. They had run out of food and medicine.

“I can’t be held responsible for any lapse in the coordination of activities that the Oversight Committee, the Ministry of Health and Medical Services and the Maritime and Rescue Coordination Centre (MRTC) are all responsible for during the COVID-19 pandemic.

“Why was my ship targeted in terms of swabbing, pre-departure checks when other vessels were never subjected to such scrutiny. This is not fair on us and largely on seafarers. We too have a job to support the people of Solomon Islands,” he said.

Captain Mamaloni also revealed that prior to departure from Honiara, he was told the Patrol Boat which was on its way to Ontong Java was carrying food rations and medicines for the people of Ontong Java.

“But when I checked on arrival in Ontong Java, the Patrol Boat never brought any food rations or medicines for the people of Ontong Java,” Capt Mamaloni said.

The Solomon Prestige2 arrived back in Honiara at 10:35pm last Thursday. Amongst the crew members and passengers were five children and a sick patient.

But the ship has never been cleared by the Oversight Committee to berth at Point Cruz. Instead, it is anchored off Mbokona Bay with all its passengers since Thursday 24th February.

“We have never been visited since we arrived, despite promises by authorities to do so to clear us. Politics it seems has been allowed to play out in this situation. We have no food to feed the passengers onboard. On the ship is a registered nurse with his family who was on transfer to the National Referral Hospital. We are all still in the ship,” Capt Mamaloni said.

Capt Mamaloni said passengers yesterday collected what little money they had in order to buy their breakfast.

“We’ve just finished our breakfast when you called,” he told me.

Mr Mangau was responding to a question from a listener during the question and answer session.

“Investigation on the matter is continuing,” the commissioner said.

He added that the issue with the Asians brought over from MOI onboard the Police Patrol Boat is a matter for the Immigration Department to deal with.

“The man is too involved in petty politics, which has clouded his judgement on matters of emergency such as this situation. I think he should be removed,” Dr. Aipia said.

He warned that if a vessel such as Solomon Prestige2 can no longer be allowed to take emergency supplies such as food and medicine to Ontong Java, no other vessels would be allowed in.

“We will make sure any food supplies for businesses here would be confiscated and shared equally by the people of Ontong Java,” he said.