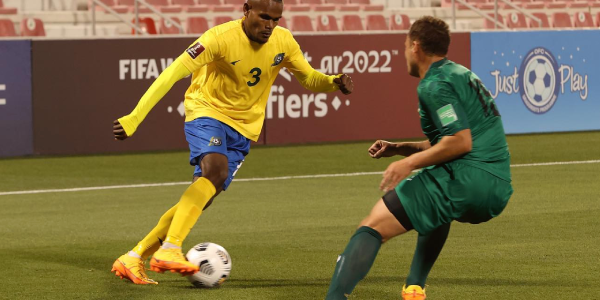 THE country’s national men’s team has made a positive start to their World Cup Qualifiers with an opening 2-0 win over Cook Islands in Qatar yesterday morning.

First half goals by Atkin Kaua and Alvin Hou were enough to seal victory and register the first three points.

Atkin Kaua found the back of the net 20 minutes into play following a cross from Raphael Lea’i.

Captain Micah Lea’alafa found the unmarked Alvin Hou in front of the goal for the second and final goal a minute into added time before the half time break.

Despite missing some golden scoring chances, the national team dominated possession from the start, leaving the Cooks the option of resorting more to a defensive style of play.

This is the first international match the national team has played in over two years.

The result does not go down well with many football fans and supporters back here at home.

Most expected the goal margin to be more than two goals.

Others commended the team for their first three points and encourage the team to step up their performance in their remaining two matches.

The national team will take on Vanuatu on match day 2, while the Cook Islands meet Tahiti.

Meanwhile the second group A match between Vanuatu and Tahiti was cancelled after some of the Vanuatu players were tested positive with Covid-19.