Women urged never to give up

You are here:
FeaturesFeatures - WomenNews 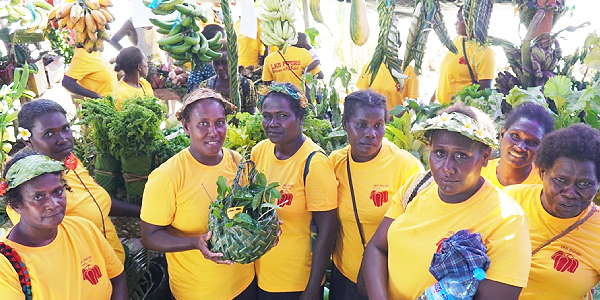 RURAL women farmers have been encouraged to never to give up, continue to think out of the box and work hard to achieve their dreams.

This sentiment was expressed by Ministry of Agriculture and Livestock (MAL) Permanent Secretary Ethel Frances Tebengi on Thursday in front of hundreds of rural farmers at a packed MSG complex for the Diversity Fair.

Ms Tebengi was the guest of honour at this fair, the first of its kind to be staged in the Western Province, by the Kastom Gaden Association (KGA) with support from the Ministry of Agriculture and Livestock (MAL) and other stakeholders.

Majority of the farmers who participated in the two days event were affiliates of KGA.

Three farmers association from West Gizo and Kolombangara were part of the mini-agriculture show which commenced on Wednesday.

The majority of the farmers who turned up for the programme were women.

Given the high number of female participants, the PS expressed gratitude for the support and involvement of women in the agriculture sector.

She said she was encouraged to see women dominating the sector.

The PS encouraged the women to maintain their involvement in the agriculture sector.

She also acknowledged men who continued to support women in the sector.

The fair ended on a high note, Thursday.