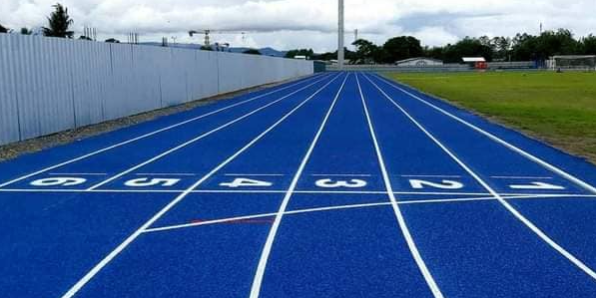 Many have been excited about the new project.

No doubt our local athletics and runners are already excited to have their first run at the new running tracks.

It would give them time to start practising.

Indeed the project has already given so much pride to Honiara residents and our sports people.

Over the past months construction had been going on behind the blue colourbond walls at the King George Sixth School area where the running track is located.

Apart from the running tracks and a football field is also completed.

So our football teams will also be able to enjoy a top class football pitch.

Its the first of the many projects earmarked for the 2023 Games and is likely to be officially handed to the National Hosting Authority (NHA) soon.

In the mean time, lets thank the concerted efforts both by contractor CCECC and project management enterprise CSADI for the work done.

Big thanks also goes to the Peoples Republic of China (PRC) for ensuring the project and other projects continue to make progress despite the many challenges brought about by the health pandemic.

The current government must also be commended for its commitment to ensure the project is making progress.

Indeed the completion of this international criteria sports stadium symbolizes a further step forward of friendship between China and Solomon Islands.

Not only that but it will transform Honiara and our people will soon realize the dream to host 2023 Pacific Games will soon come into reality.

So lets embrace this Games with pride and lets take care of these facilities once completed.

The new Futsal complex facility which is funded by Indonesia will also be handed over later in the year.

The current Games project is one of the largest projects currently supporting the economy of the country.

And Prime Minister (PM) Manasseh Sogavare said: “The 2023 Pacific Games is the biggest economic driver for our country right now and will continue to be so in 2023, in the order of magnitude this country has not seen before.”

Currently the constructions towards the 2023 Games is making steady progress despite challenges from COVID-19 and weather.

PM Sogavare on Friday stated that because of the 2023 Pacific Games, the capital city’s water supply system and sewage system will undergo major improvements.

He said it will provide a much needed facelift for the KGVI school, Tenaru, Don Bosco, SINU- Panatina, Ranadi and Kukum campuses including St Nicholas High School.

“None of these have occurred without the Pacific Games,” the PM said.

As a result of the Games, a good number of sports and playing grounds around the city are also undergoing major renovation work.

New ablution blocks are also built near the sports ground.

The country is ready to host the Games November next year.

Despite the many challenges the country is prepared to host the Games.