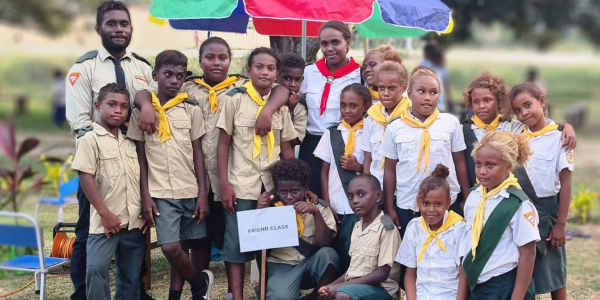 LOCAL pathfinder clubs in the country has joined the rest of the world to celebrate 65th anniversary of World Pathfinder Day over the weekend.

And it was a busy weekend for many pathfinder clubs around the country.

The theme for this year’s celebration is; ‘Lets Change the World.’

For many clubs the weekend program for many commenced on Friday night with vespers prayer service.

The highlight of the program was on Sabbath where the pathfinders conducted the weekend’s Program from the Sabbath School, Divine Service, AY Program and the Closing Sabbath.

Some of the clubs use the day to reflect on the work of pathfinders, shared testimonies, singing of songs, conducted pray sessions, have a bung lunch, conducted visitation and organized their social night programs.

Others concluded their programs yesterday through sports event.

Some clubs also use the weekend’s program to go out for campout to allow them to have fellowship together.

Some clubs, use the Sabbath program to display of their works through the setting up of information booths and stalls to allow their parents, family members and members of the church to see what they have been doing over the past years and the yearly programs.

“World Pathfinder Day has been an annual tradition since 1957,” highlighted Andrés Peralta, World Pathfinder director at the General Conference (GC) of the Adventist Church based in United States.

“In many places around the world, this day is an important opportunity each year to conduct youth-led evangelism and outreach into their communities,” he said.

During the weekend program the new logo for the World Pathfinder Day (WPD22) was introduced to all the members. The logo was created by the General Conference Youth Department.

The first pathfinder club started some 72 years ago in California.

Since then it expanded and thus, in 1950s, became an official worldwide organization of the Adventist church, and grew rapidly.

Pathfinders is now a global ministry affecting thousands (if not millions) of young people worldwide.

The COVID-19 restricted in the past two years had also affected the work of pathfinder clubs and this is the first time for most of them to come together and celebrate the event.