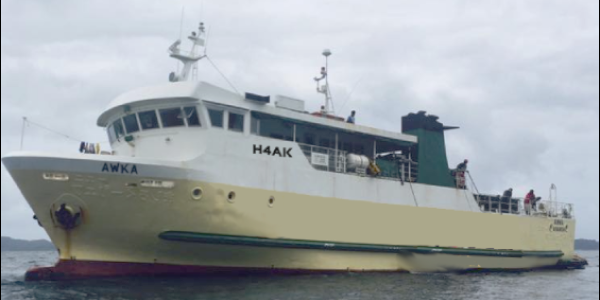 A 51-year-old woman suspected of having contracted the corona virus has given an independent account of the potential origin of the deadly disease in Solomon Islands.

The woman, a widow and mother of five, is an employee of the company that owns the MV Akwa. The Government has blamed passengers on the ship for bringing the virus from Ontong Java when it arrived in Honiara on 10th January.

The community south of Auki where the woman lives has gone into self-isolation since she arrived there on Monday 17th January. But repeated appeals for test have fallen on deaf ears.

Her account appears to collaborate with the Government’s claim that the origin of the virus is Ontong Java.

She gave the following account of events involving the MV Akwa.

Friday 14th January – She was called to clean up the VIP room of the ship. She was on the boat from 11am until 3pm that day. A relative died in Honiara between this date and Monday 17th January;

Monday 17th January – the woman accompanied the dead body to Auki onboard the MV Tahimareho that evening, arriving in Auki just before midnight. With others, she then traveled by road to her village near Bina Harbour, just south of Auki;

Solomon Star was told on Wednesday it was then that the woman began showing symptoms of the corona virus.

“As a community fearful of the disease, we immediately put her in self isolation. We also called Kilu’ufi Hospital to report the suspect case, Placid Walekwate said.

“But no one came. Then someone else from Honiara called, relaying the news that no one would come unless “our bosses approved such visit.”

“This woman is still in self-isolation. It is important that such a case like this be attended to as early as possible if the government wants to be on top of the epidemic. It is also important to address the curative side of the transmission rather than concentrate on the control side,” he said.