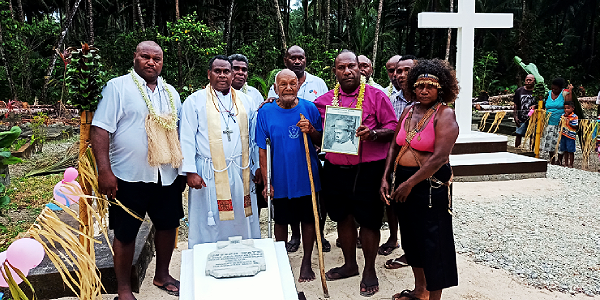 THE Archbishop of the Anglican Church of Melanesia (ACOM) the Most Reverend Leonard Dawea visited Southern and Arekwa regions of the Diocese of Malaita from 13th to 20th August.

This is his second visit out to the dioceses as the primate of ACOM. His first visit was in the Diocese of Ysabel in Lawe region, Western Province in July.

Archbishop Leonard said, he chooses to visit Southern and Arekwa regions of Malaita this time round as the two regions prepare to become an autonomous diocese in the ACOM.

“A bill on your proposed new diocese will be tabled and discussed in the coming General Synod in November.

“And as chairman, this visit will put me in a better position to understand your rationales and needs to become a diocese.

“My visit will put me in a better position to contribute constructively to your bill,” The Most Rev. Leonard Dawea said in all parishes visited.

“It is right for me as a Chairman of the General synod to see for myself and talk with you about your intentions to become a diocese,” he added.

“I witnessed your excitements and preparations towards this establishment and I know you have been well informed by the office of the Assistant Bishop of Malaita in Afio and your Task force committee on the criteria you must fulfil to qualify you to become a separate diocese from the original diocese of Malaita,” the Archbishop told the parishioners during the visit.

In his encouraging words, the Archbishop called for cooperation on all members of the parishes he visited to work together with their Assistant Bishop, clergy and their task force committee as they plan and work towards becoming a new diocese.

“Should you become diocese, her responsibilities must never be left to the Bishop, the Priest or Catechists alone. It belongs to all of us, we must take ownership of it including her physical and spiritual development,” The Archbishop warned the parishioners.

Archbishop Dawea also reminded the parishioners visited that becoming a diocese is a huge task; it needs your prayers, support and cooperation with your leaders.

“However, we must be encouraged that if it is God’s will for Southern and Arekwa regions to become a diocese from the Diocese of Malaita, no human knowledge can object it.

“At this point we must continue to discern God’s mind for his Church,” he added.

The general atmosphere during this visit shows the people around the two regions are eager to become a separate diocese.

The 16th General synod that would be held at Selwyn college come November this year would decide whether or not Southern and Arekwa regions will become the 10th Diocese in the Anglican Church of Melanesia.

During this episcopal visit, the Archbishop also witnessed tribal land-owning groups signing consent agreements allowing their land to be developed by the Church.

A total of fifteen tribal lands in the two regions have agreed to give their land to the proposed diocese.