Acting GG to make public statement on The Queen’s passing 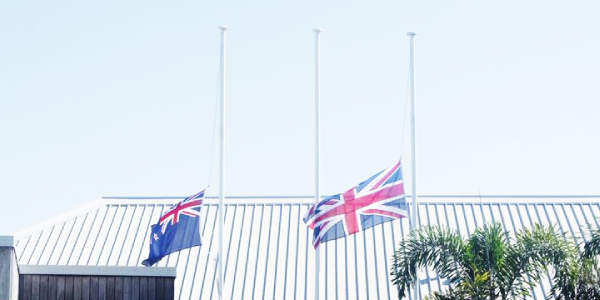 THE Government House will make an official public statement at 2pm this afternoon following the death of Queen Elizabeth II early this morning (Solomon Time).

The official statement will be presented by acting Governor General Patteson Oti. The Governor General Sir Reverend David Vunagi is currently in Isabel Province but is expected to return to Honiara later today.

Following the statement from the Government House, Prime Minister Manasseh Sogavare will also make a public address to the nation this afternoon.

The Government is currently planning a public holiday for Solomon Islands following the death of The Queen who is also the Head of the Commonwealth which Solomon Islands is part of.

Queen Elizabeth II died peacefully at the age of 96 at her Scottish Estate at Balmoral on Thursday afternoon (British Time).

Some schools in Honiara have closed today and flags have now been flown at half-mast since the official announcement from Buckingham Palace of The Queen’s death.

King Charles III has issued an official statement about the death of his mother, Queen Elizabeth II.

In the statement from Buckingham Palace, the King, 73, said, “The death of my beloved Mother, Her Majesty The Queen, is a moment of the greatest sadness for me and all members of my family.”

“We mourn profoundly the passing of a cherished Sovereign and a much-loved Mother,” he continued. “I know her loss will be deeply felt throughout the country, the Realms and the Commonwealth, and by countless people around the world.”

King Charles concluded, “During this period of mourning and change, my family and I will be comforted and sustained by our knowledge of the respect and deep affection in which The Queen was so widely held.”

The Queen came to the throne in 1952 and reigned for 70 years until her passing early this morning (Solomon Time).