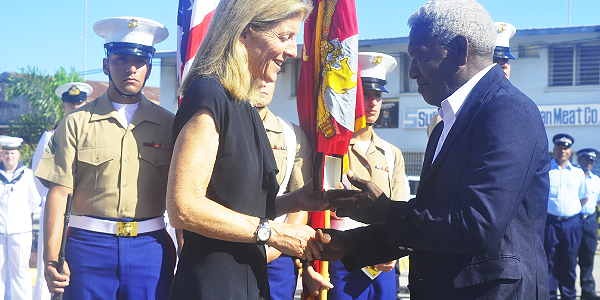 THE selfless service and sacrifice of the Solomon Scouts and Coastwatchers were acknowledged during the commemoration of the 80th anniversary of the Battle of Guadalcanal, Sunday.

US Ambassador to Australia and daughter of John F. Kennedy made this statement during the dawn service at Skyline Ridge yesterday (Sunday 7th August 2022).

“Because of the selfless service and sacrifice of the Solomon Scouts and Coastwatchers, the Allies were able to hold Guadalcanal.

“And because of Guadalcanal, the Allies achieved victory in the Pacific,” Ambassador Kennedy said.

“Thanks to them, he and his crew survived the sinking of PT-109 and were able to return home and eventually run for President,” she said.

She said her father’s experiences on Guadalcanal made him the man and the leader that he was, just as the experiences of so many others shaped the men and women they would become.

“It resolved him to seek a more peaceful and just world, and he gave his life for his country.

“I’m deeply touched to be here today, knowing that I might not be here if it were not for Biaku Gasa and Eroni Kumana,” Ms Kennedy said yesterday.

“I look forward to returning to Solomon Islands with my children and showing them this part of our family history – which is so closely intertwined with this country – and telling them about the partnership we’ve shared with Solomon Islanders in years since the war.

She added that countless Americans and Allied families have Solomon Islanders to thank for their survival.

“We’re here today not only to express our gratitude to those who sacrificed during the war, but also to those who established peace and worked for the years and decades that followed to bring our nations closer.

“It’s our way to honour those who came before us and to work and do our best to leave a legacy for those who follow,” she said.

Ambassador Kennedy is part of the US delegation led by Deputy Secretary of State Wendy Sherman in Solomon Islands to honour those who fought the Battle of Guadalcanal during the Second World War.