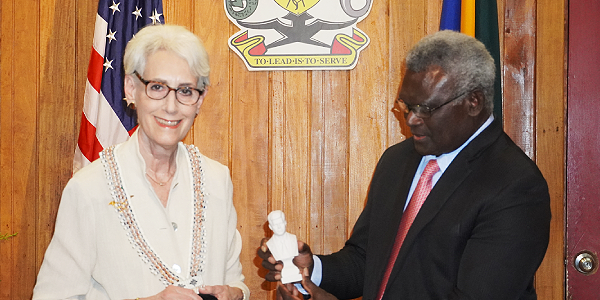 PRIME MINISTER Manasseh Sogavare appears to have snubbed the delegations of the United States of America and other allies by being absent from the dawn service commemorating the 80th Anniversary of the Landing of the Marines on Guadalcanal.

Mr Sogavare was to give a speech at the dawn service at the Guadalcanal American Memorial at Skyline Memorial, but he never showed up.

No official explanation was given for his absence, which is seen by some as a premeditated move to take the bull by the horn.

As expected, Members of the Opposition including leader Matthew Wale and his deputy Peter Kenilorea Jnr attended the US ceremony.

Deputy Secretary of State, Wendy Sherman, who led the US delegation for the occasion later told a news conference she was sorry that the Prime Minister had missed a great opportunity to build a new partnership between the United States and Solomon Islands.

She also announced a range of support for Solomon Islands after an hour’s meeting with Prime Minister Sogavare on Sunday afternoon.

These include the appointment of a US charge de’affaires, the visit of the Mercy or hospital ship to Honiara in the next few weeks as well as the restoration of the US Peace Corp program in Solomon Islands.

The Peace Corp pulled out of Solomon Islands after the coup in 2000.

Hon Sherman told journalists that President Joe Bidden is serious about its relationship with Solomon Islands as is with other Pacific Island countries and has invited Pacific Island leaders to meet in Washington DC in September this year.

Office of the Prime Minister explains that on diplomatic level the Minister of Police and Correctional Service Hon Anthony Veke well represented the government.

Asked why the US all of a sudden has engaged in a flurry of activities, when the Pacific had been kept on the back burner for the past 80 years.

She denied this was the case.

“Some of these things take time,” Hon. Sherman said.

Attendances by government ministers in the two ceremonies held yesterday – the first at the US Memorial at Skyline at 6am and the second at the Japanese Memorial at Mount Austin at 11am were noticeably small.

The last of the weekend ceremonies would be held at the Bloody Ridge from 6am today before the US delegation, which included Caroline Kennedy – the daughter of former US President John F Kennedy and now US Ambassador to Australia – leaves.

These ceremonies were attended by defence Ministers from Japan, Australia and New Zealand as well as a strong showing by naval officers, military personnel as well as air force officers.