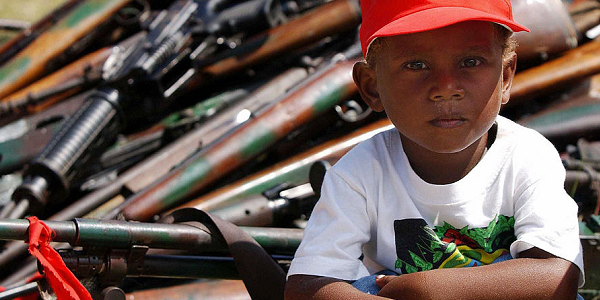 By Graeme Dobell
The Strategist

The institute’s 2003 description of Solomon Islands as ‘a failing state’ was one element in the Howard government’s policy somersault.

The key factor in the U-turn was a cry for help from Solomon Islands—the institute’s role was a timely report on the new direction needed.

The plea from Honiara came as Elsina Wainwright’s Our failing neighbour set out how Australia should step in to stabilise Solomon Islands after five years of turmoil. The conflict, she wrote, had ‘paralysed the country’s capital, stifled its economy, disrupted government, discouraged aid donors, and inflicted suffering and hardship on its people. It has virtually ceased to function as an effective national entity.’

I especially recall in its early years that ASPI took a different position on the possibility of intervening in the Solomon Islands. In time the government decided on a course of action which chimed with that put forward by ASPI. It was a significant change in policy direction. Events demonstrated the wisdom of that change.

Much Canberra policy orthodoxy was swept aside as Australia galvanised to create what became the Regional Assistance Mission to Solomon Islands (RAMSI).

Previous Australian policy had been judiciously proper in respecting the sovereignty of South Pacific states. This hands-off stance was explained to me in 2002 by the secretary of the Foreign Affairs Department, Ashton Calvert: Canberra’s aim in the South Pacific was to ‘cleverly manage trouble’.

A gap had opened between defence guidance about Australia’s determination to fight for the island arc and what Canberra would do for the stability of the troubled nations of the arc. Well into the 1990s, Australia promised to do its bit so island states could ‘look after their own strategic interests’; in a crisis, the focus of the Australian military would be ‘evacuation of Australian citizens’.

At the start of 2003, Australia’s policy in the South Pacific was to manage problems without getting too close to what was going wrong. The foreign policy white paper, released in February, noted that Australia had major interests in the stability and development of the South Pacific. But under the heading ‘What Australia can and cannot do to help’, the statement expressed the non-colonial mantra:

When problems are so tightly bound to complex cultural traditions and ethnic loyalties, only local communities can find workable solutions. Australia stands ready to help those South Pacific countries willing to help themselves by tackling the problems of poor governance and economic underperformance.

Two months after the white paper, on 22 April, the prime minister of Solomon Islands, Allan Kemakeza, faxed a desperate letter to Australia’s prime minister pleading for help. The chaos in Honiara had become so bad that cabinet couldn’t convene for fear of being held ransom by armed gangs. The new (British) police commissioner in Solomon Islands couldn’t arrest one of his own senior officers who had walked into the Treasury and demanded money.

The response to that appeal from Honiara was the start of the policy revolution.

The Pacific chapter in the white paper was to have set the policy course for the rest of decade. By July, those prescriptions had been shredded as Australian police and troops led the regional intervention into Solomon Islands—a remarkable example of how declared policy and set strategy can be remade by events and changed political judgements.

Solomon Islands was in dire need and the Pacific Islands Forum supported action. Australia would lead with the essential money and muscle. Yet, in launching the intervention—and in its eventual resilience and endurance—a key to success was in the name: it was a regional assistance mission.

The forum offered legitimacy as well as support. The Solomons turned for help not just to the region’s big power but to all its neighbours. In all the twists of Solomon Islands’ politics in coming years, that regional dimension was RAMSI’s anchor as well as badge.

ASPI offered fresh thoughts to a government in need of better answers, as Howard’s cabinet discarded the advice of officials in deciding to intervene. Wainwright reflected that her report provided a ready-made blueprint:

We proposed the operation should be police, rather than military led: the security challenges facing Solomon Islands were of a kind best tackled by police, and the optics of a police-led operation would be more benign. Such an intervention would require Solomon Islands’ consent and should be multinational, with regional endorsement and participation. It should have two phases: the first would address the law and order crisis, and the second would be a comprehensive, long-term capacity building program to tackle governance and economic challenges which were fuelling the crisis.

Australia stopped worrying about an exit strategy from its own region and made a commitment to the Solomons.

A year later, in June 2004, Howard used a speech to ASPI to describe the terms of his government’s somersault, and a confident ‘new phase’ in Australia’s strategic role:

There was a time not so long ago when sensitivities about alleged ‘neo-colonialism’ perhaps caused Australia to err on the side of passivity in our approach. Those days are behind us as we work constructively with others to address the challenges faced by our immediate neighbourhood … Australia has a particular responsibility to help those countries struggling to secure the basic requirements of law and order. In this context, the RAMSI mission in the Solomons serves an important demonstration—both to those who value peace and order and to those who might seek to undermine our efforts.

Australia had filled the post of special coordinator throughout and paid most of its $3 billion cost. The final RAMSI coordinator, Quinton Devlin, told ASPI the mission was a ‘genuine success’ because of the size of the political and community disaster Solomon Islands had avoided.

RAMSI, he said, ‘put an end to a dire humanitarian situation on Australia’s doorstep and reversed the decline of a disintegrating nation that threatened security and stability in the broader Pacific region. RAMSI halted Solomon Islands’ descent into lawlessness and towards economic collapse and state failure.’

The criticisms of RAMSI were often as big as its claimed achievements. The intervention was attacked as an ‘emerging parallel state’, for encroaching on Solomon Islands’ sovereignty, for heavy-handedness and ‘mission creep’.

Devlin’s response was that frequently ‘criticisms came from the political class in Solomon Islands, which in some quarters resisted RAMSI’s suggested good governance and financial reforms, and in others, weren’t happy that RAMSI was involved in the investigation and arrests of MPs’.

The foreign intervention had enjoyed remarkable support: surveys conducted from 2006 to 2013 showed that popular backing for RAMSI never dropped below 85%.

The cost and the long stay reflected the scope of the original mandate agreed by Solomon Islands and the forum, Devlin said, calling for state building, not just stabilisation.

Devlin said RAMSI’s 14-year trek proved that ‘even with all the resources and good will in the world, there are limitations on what states can do to help other states address the causes of their insecurity, even while restoring that security’.

He said RAMSI showed that state-building interventions must be:

RAMSI saved the Solomons from crocodiles. That’s more than a figurative boast. The destruction of all guns and the disarmament of local police meant that only RAMSI was legally allowed to possess or use guns.

A crocodile cull was part of what RAMSI did to make Solomon Islands safer.