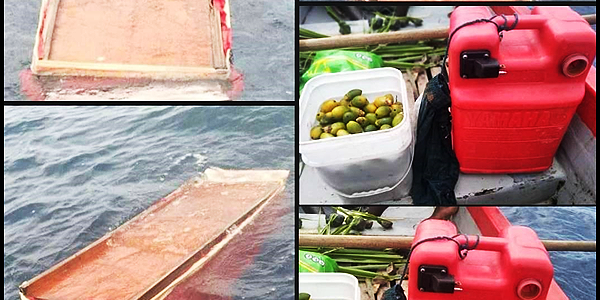 ITEMS believed to be that of the boat with 14 passengers, including six children that went missing on New Year’s Day have been found floating near Moli Island in Choiseul province, on Tuesday morning.

According to a report reaching Solomon Star on Tuesday, fishermen from Tepazaka, Ward 6 in Northwest Choiseul spotted the items; a wooden coffin, a 25-litre gasoline tank, and a bucket of biscuit filled with betel-nut.

They discovered the items while on a fishing trip.

Speaking to this paper via mobile phone yesterday, a fisherman Lesley Roqe said he first spotted the wooden coffin at around 11 am.

“When I called out to the other fishermen to inform them of my sighting, they told me that they had also discovered a gasoline tank and a bucket filled with betel-nuts,” Roqe said.

They then posted pictures of the items discovered on Facebook, to alert the public of their discovery.

This paper understands that as of yesterday, the boat is still missing between the seas of Vella La Vella, Shortland and Choiseul Province.

Eight adults  and six children are part of those that went missing, which makes up the total of 14.

Meanwhile, Gizo Police already contacted the fishermen and have followed up on the details. All the items found are now being kept by the fishermen.

Search and Rescue Team in Taro, Choiseul, together with the Police Response Team in Gizo have already been deployed to the waters between Vella, Shortland and Choiseul Province.

In a call for help and rescue mission, MV Shortland also went out to help in the search.

Its understood that the search mission is still continuing yesterday.

Both ray boats left Gizo on Saturday morning at 9am bound for Harapa in Shortland when they encountered strong wind and rough seas.

That was when they failed to reach their destination.

However, the other surviving boat drifted and finally landed at Moli Island on Sunday morning and alerted police about the other boat.

That was when a search was mounted.

By FOLLET JOHN in Honiara & ULUTAH GINA in GIZO