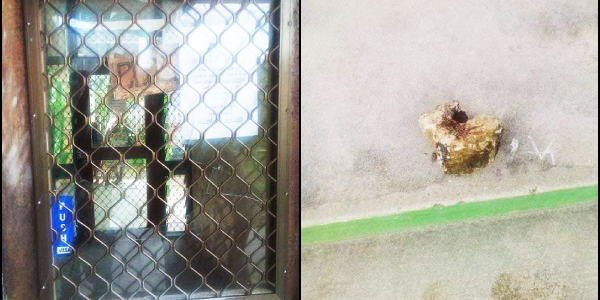 BSP staff and customers turned up at the bank on Friday morning, following the public holiday on Thursday to mark the county’s 44 independence anniversary only to realise one of its glass doors was broken.

The vandalism delayed the opening of the bank yesterday morning allowing time for the damaged door to be fixed.

The door was fixed allowing the bank to open for business yesterday to the satisfaction of customers who were worried the vandalised incident might cause the bank to close for the day.

Speaking to this paper yesterday, Malaita Premier Daniel Suidani condemned the incident describing it as a senseless act on one of the most important infrastructures in the province.

While apologising to the BSP management for the pusillanimous act, he called on the Malaita public, especially those who live in Auki to have respect for important infrastructures like BSP bank.

In the meantime, Auki Police are investigating the incident.

The last time the BSP branch in Auki was vandalised was six years ago in January of 2017 when criminals successfully broke into the bank but failed to remove cash.

At this stage it is not clear what the motive behind the action is as police have yet to establish if it was a failed break-in attempt or a mistake.

With that, the Auki public are urged to help police by reporting anyone spotted doing suspicious activities at the Auki BSP bank on Thursday night.

It is understood that the public normally use the BSP bank premises as a sitting place during night times as the premises have no security and fence to secure the property from intruders.