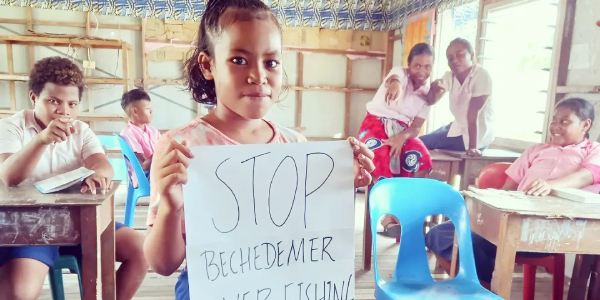 COMMUNITIES of Malaita Outer Island (MOI) are calling on the Government through the Ministry of Fisheries and Marine Resources to speed up the beche-de-mer (sea cucumber) management plan.

“Our call is for the Ministry of Fisheries to speed up the beche-de-mer management plan,” George Kaola, a grade five teacher who organized the protest said on behalf of the students and communities in an interview with this paper over the weekend.

He said, the protest demonstrated their disappointment to the ongoing illegal harvesting of the lucrative sea cumber commodity despite the closure of harvesting in early September.

According to the Ministry of Fisheries and Marine Resources (MFMR) 1st September was the due date which means all buying, fishing and selling must come to an end.

But according to Kaola, the illegal harvesting is being undertaken on during the few weeks required to dry and pack the products.

“There is also three or four weeks for drying and packing after the due date. These are the weeks that are usually being abused,” he claimed.

He explained, the peaceful protest is part of his class activity.

“Beche-de-mer is not part of SI schools’ curriculum but I chose to teach it because its an important resource in our Islands.

“Thanks to Patrick Pickacha and his team for compiling the book on our marine animals which I used to teach my students,” Mr Kaola who recently relocated to work at MOI said.

He said, in Ontong Java they have two main villages Luangiua and Pelau. Luangiua is the biggest and populated ones.

“This is where illegal beche-de-mer fishing happens before the ban was lifted.

“The breakdown of their house of chief resulted to law and order problems. A sad situation indeed.

“Pelau is the other village North of the Atoll. Pelau is in order and manage its beche-de-mer well and did not support the illegal beche-de-mer fishing,” he said.

He told the paper that the issue Pelau Community is facing is, people from Luangiua Community usually poached their beche-de-mers.

“This is where Pelau House of Chief expects the Police to step in chase or arrest the poachers because of their illegal fishing but the police did not do anything.

“Why do they have to wait for Fisheries Ministry when it’s known as illegal and knows the due date already,” he said with a concern.

He pointed out that business culture on the atoll is a bit different. “Customers are obliged to sell their catch to local businesses who provides for them during the sunny and rainy years.”

Kaola said, currently most buyers already returned to Honiara and buying has stopped.

“Only one buyer is still encouraging his agents on Ontong Java to continue fishing. This is the reason why we decide to protest because both villages are still fishing beche-de-mer because this buyer’s agent is encouraging them and rumours that there will be another 3 months extension.

“Our class suggests it’s enough. The year of beche-de-mer fishing is more than enough.

“Now undersize beche-de-mer is a lot and beche-de-mer catch is getting less and less and we experience the rise of algae on seabed and corals may be because of the decline on beche-de-mer population,” he said.

He said, it’s sad because local buyers’ price are different because they are dictated by their Chinese agents.

Because there is no seaweed farming it had forced many people on the island to fall for beche-de-mer illegal fishing because its their only money-making activity, he added.

Beche-de-mer is one of the lucrative marine products which got many rural Solomon Islanders engaging in the trade to earn an income.