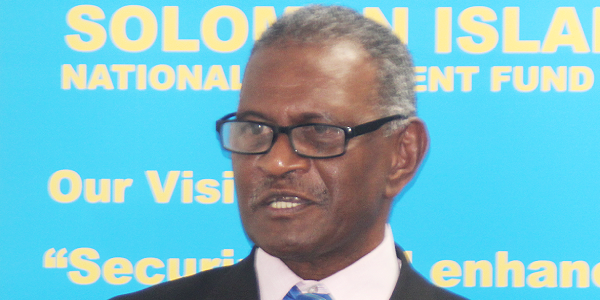 THE COVID-19 pandemic and its subsequent outbreak in the country had significantly impacted on the Solomon Islands National Provident Fund (SINPF) membership level which had seen a drop.

This was revealed by the Fund’s Chief Executive Officer (CEO) and General Manager Mike Wate on Friday when presenting an overview of the Funds financial and operational performance for the 12 months period ending 30th June 2022.

On Friday the Board declared a 2.65% interest crediting rate to its members.

Mr Wate said, for this year about 5,261 new members were registered during the year. This is a drop from the previous year’s level of 5,967 where new members join the Fund.

“This downward trend started in 2020 with the commencement of the Covid-19 pandemic,” he said.

He highlighted that total membership with credit balance slightly increased to 145,977 members up from 144,198 recorded in the previous year.

Contributions received from employers and members increased to $353.1 million up from $344.2 million in 2021, he added.

As such total member contributions balance therefore increased to $3.4billion from $3.3 billion in 2021.

He further highlighted that active contributing members slightly declined to 55,632 from 57,530 recorded in the previous year.

“This downward trend also started in 2020 when our economy started losing its steam.

As for member benefit payments, he said, a total of 6,695 benefits were paid out to members during the year under the formal sector. Most of them are those who have retired or have reached the 50 years of age.

“The large bulk of the 2022 benefits payments were made to retiring members 50 years and above for $202.8 million.

“The total member benefit payout increased to $326million on the previous year level of $324 million.

In terms of employers, the CEO said, new employers registered during the year fell significantly to 78 down from the previous year level of 218, reflecting the continued slowdown in the country’s economy.