Catholic believers enacts ‘the passion of Christ’ in Honiara 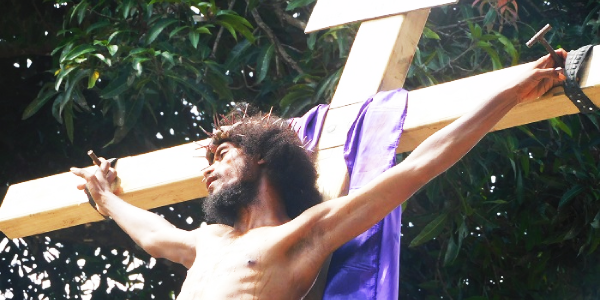 To the youths and parishioners this is more than just a show but a tradition that dates back more than 2000 years ago showing the powerful biblical event taken from the Gospels of the New Testament of the Bible.

According to the gospels Jesus was betrayed by Judas on the night of the Last Supper that was commemorated on Holy Thursday night. On Friday morning, Christ’s arrested and was brought before Annas, a powerful Jewish cleric. Annas condemned Jesus for blasphemy for refusing to repudiate Annas’ words that He was the Son of God and from there, Jesus was sent to Pontius Pilate, the Roman governor of the province.

The day followed with 3pm Veneration of the Cross where Christians venerate by, kneeling, and bow at the foot of the Cross of Jesus.

For Catholics around the world and according to Catholic Liturgical calendar, Good Friday is the second day of the Easter Tridiuum that begins on Holy Thursday which involves the Lords supper with his Disciples, washing of feet, followed by this Passion of Christ and will end on the Mass of the Resurrection of the Lord on Sunday Evening.

The single celebration of the Triduum marks the end of the Lenten season, and leads to the Mass of the Resurrection of the Lord at the Easter Vigil.

This Re-enactment was opened with an opening prayer by His Grace Archbishop Christopher Cardone and Australian Defence Force Chaplain Hayden.

“It’s time for us to reflect on our daily lives on how we made our relationship with God in this challenging time”.

Catholics will continue with Easter Vigil today Saturday at 7pm for the Mass of the Resurrection of the Lord on Sunday.