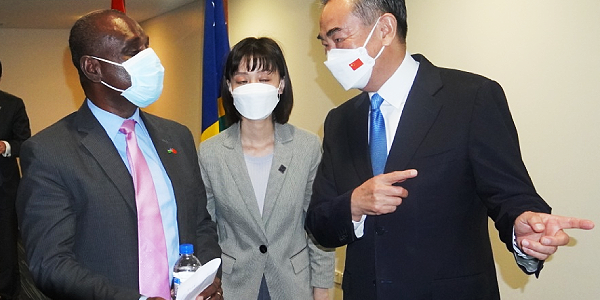 CHINA’s Foreign Minister, His Excellency Wang Yi has ended his visit to Solomon Islands on a high note, jointly announcing a series of Memoranda of Understanding (MOUs) signed in Honiara this week.

The one-and a half day visit is the Minister’s first to Solomon Islands and is the start of a tour of the South Pacific. The Minister leaves for the Cook Islands and Niue this morning.

The visiting Foreign Minister later paid a courtesy call on acting Governor General, Patteson Oti, who is also the Speaker of the National Parliament. The incumbent Head of State, Sir David Vunagi, is away overseas on medical grounds.

In a joint news conference concluding Foreign Minister Wang’s visit, both men announced the signing and exchange of letters on the six MOUs.

Mr. Manele told journalists formalising the MOUs and agreements with the exchange of letters “another step forward in cementing the bilateral solidarity of Solomon Islands and (the) People’s Republic of China to enhance cooperation, mutual trust and realize prosperity for all.”

He told his counterpart, “it is truly an honor to host you and your delegation (on) the first leg of your Pacific tour and be assured by your goodself that Solomon Islands and the People’s Republic of China relations is at the forefront of PRC-Pacific relations.”

“Since the establishment of the permanent bond between Solomon Islands ant (the) People’s Republic of China, China has impressively supported Solomon Islands in the country’s socio-economic, infrastructural and development aspirations.

“This visit marks a significant milestone in the friendly relations between Solomon Islands the People’s Republic of China as the two governments continue to strengthen cooperation, mutual trust and respect and enhance bilateral commitments to realize a WIN-WIN situation for both parties,” the Minister said.

In response, Minister Wang reiterated China’s commitment and vows to work together in order to achieve better outcomes for all.