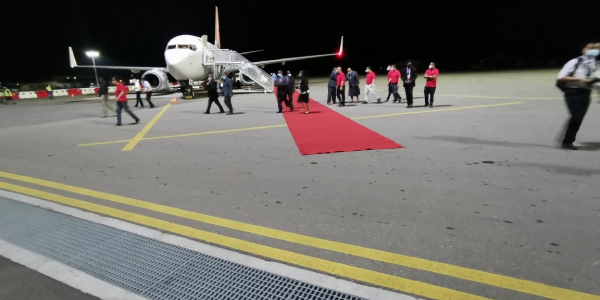 CHINA’s Foreign Minister Wang Yi has arrived in Solomon Islands on a two-day visit – his first since Solomon Islands and China established diplomatic relations two and a half years ago.

The plane carrying Minister Wang and his delegation of top officials at Vice Ministerial level – touched down at Henderson International Airport in Honiara at 12:12 this morning.

Solomon Islands senior government Ministers led by the Minister for Foreign Affairs and International Trade, Jeremiah Manele met the top level Chinese delegation on the tarmac as Minister Wang stepped off his plane to a red carpet welcome.

They were joined by His Excellency, Li Ming – China’s Ambassador to Solomon Islands in welcoming Foreign Minister Wang.

Everything was quiet – under an almost star-studded sky in the evening breeze.

There was no police band nor were there ordinary citizens waving flags to welcome the visitor. In part this was due to a major refit of the arrival concourse of Henderson International Airport. As well, the visit is overshadowed by falsehood Western allies have drummed up against a security agreement which both countries signed earlier this year.

If those towing the West’s line expected to see gun-trotting security men running about when the plane carrying Foreign Minister Wang touched down, they would be bitterly disappointed.

What they would have seen was the red carpet being rolled out for Minister Wang and his delegation.

The entire procession was under the watchful eye of members of the Royal Solomon Islands Police Force (RSIPF) from start to finish. It took less than half-an-hour for the arrival area to clear.

As the convoy of about 15 vehicles sped away from the tarmac, everything seemed quiet and peaceful again – a reflection of what Solomon Islands should have been if there were no foreign interference at all.

Solomon Islands means peace – the Hapi Isles – a name given it by Spanish explorer, Alvoro de Mendana in 1567.

Foreign Minister Wang has a number of formal engagements today, including a meeting with Prime Minister Manasseh Sogavare and his Cabinet. He will also pay a courtesy call on the Governor later in the day.

Solomon Islands and China are also expected to sign a number of agreements before Foreign Minister Wang leaves for Kiribati tomorrow.