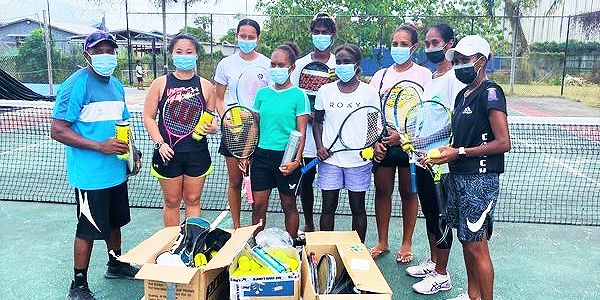 North West Sydney Tennis is based in Pennat Hills in Sydney, Australia.

An advisor with the Australian Federal Police in Solomon Islands Charmaine Li reached out to them to donate some tennis balls.

A statement from SITF said Ms Li is also a volunteer with SITA.

According to Ms Li she used to play with North West Sydney Tennis from age 8 to 18 every Saturday morning just like the children in the Solomon Islands Program.

Therefore, she is so grateful to her club, North West Sydney Tennis, for their very generous donation to SITA.

She said as a volunteer with SITA, it makes her so happy to see the equipment being used to help the players here.

SITA representative Doreen Ningalo said she was blown away by the donations as she runs her programs on the bare minimum, donations from ITF and other private businesses.

She hoped that the tennis program can grow and many more children can enjoy the sport in the years to come.

The Solomon Islands Tennis Federation hoped to make more partnerships with overseas clubs so that more of the Solomon Island players can gain exposure through competitions and exchange programs.

SITA said many of the timely donations have benefitted the eight-man-squad that has been preparing for the Pacific Mini Games.

“Marion didn’t have shoes but managed to get a near new pair of New Balance Tennis shoes which will greatly assist her game in Northern Marianas in June,” the statement said.