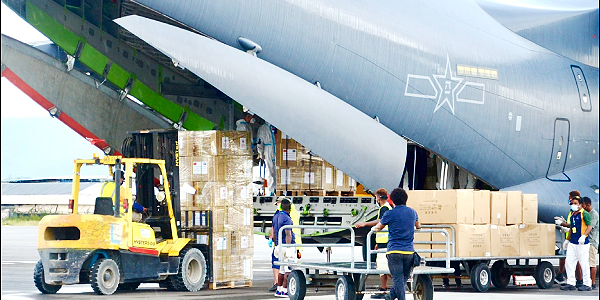 AS the debate rages over who is and who is not genuine in its infrastructure development effort in Solomon Islands, China simply keeps piling it in.

And to maintain its international reputation that it is a major donor with a heart to help, a Chinese PLA Airforce Y-20 transport plane carrying anti-epidemic supplies landed at Henderson International Airport in Honiara last Friday afternoon.

Chinese Ambassador to Solomon Islands Li Ming and Solomon Islands Minister of Health and Medical Services Culwick Togamana were at the airport to receive the life-saving medical supplies from China.

Anti-epidemic supplies, including test kits and oxygen generators weighing over 20 tons arrived onboard the flight intended to fight a growing number of COVID-19 cases, another severe challenge following the unrest that took place in November last year.

‘The medical delivery once again showed China rushing to the rescue in overcoming the difficulties such as the suspension of air routes between China and the Solomon Islands, the Global Times newspaper said.

“At this critical moment, at the request of the Solomon Islands, China once again rushed to prepare the supplies as quickly as possible and dispatched military transport planes to deliver them, fully demonstrating China’s firm support to the Solomon Islands government and its people, and shows China’s speed and responsibility as a major country.

“The supplies include test kits and oxygen-making machines provided by the Chinese central government, and personal protective equipment dispatched by South China’s Guangdong Province from the China-Pacific Island countries’ reserve of emergency supplies, as well as test kits donated by the Ministry of Public Security,” the Global Times has reported.

“A Chinese PLA Air Force Y-20 transport aircraft carrying medical supplies arrived in Honiara, , on Friday February 18. China has provided strong support and assistance to the Solomon Islands in its response to social unrest and the COVID-19 epidemic.

“The first batch of three tons of police supplies arrived on December 29, 2021. On January 26, a chartered flight sent by the Chinese government arrived in the country carrying a police advisory team, an expert team for construction projects, 50,000 doses of COVID-19 vaccines, 20,000 test kits, 60,000 medical masks and 15 tons of police supplies,” the Global Times said.