CHINA IS ALWAYS A RELIABLE FRIEND OF PACIFIC ISLAND COUNTRIES 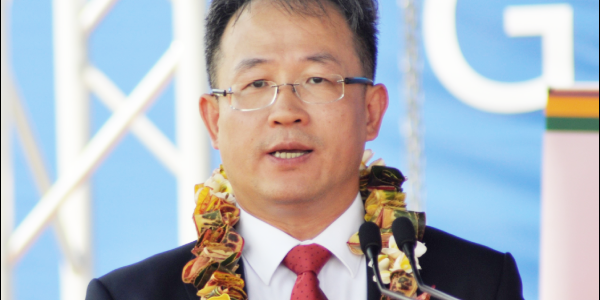 CHINA is the largest developing country. China’s foreign policy is characterized by commitment to equality of all countries regardless big or small. China always stands with other developing countries, take concrete actions to build a community with a shared future and carry out high-quality Belt and Road cooperation. Pacific Island Countries have always been priorities in China’s foreign policy.

Since 2014, Chinese President Xi Jinping has met twice with leaders of PICs, and leaders agreed to establish comprehensive strategic partnership featuring mutual respect and common development, and ushered in the new era of cooperation between China and PICs. During the first foreign ministers’ meeting of China and PICs in October 2021, Chinese State Councilor and Foreign Minister Wang Yi and other foreign ministers agreed to establish a China-PICs reserve of emergency supplies, a poverty reduction and development cooperation center, a climate action cooperation center. Now, the China-Pacific Island Countries Reserve of Emergency Supplies and the Climate Action Cooperation Center are already put into use, and a poverty reduction and development cooperation center will soon be completed. All these are concrete actions taken by China to expand cooperation with PICs.

China’s cooperation with PICs is based on respect, equality, mutual benefit, sincerity, outcome oriented and good faith. It helps promote the prosperity of PICs and well-being of the peoples, and also set up a model for developing countries to jointly pursue win-win cooperation.

In the past two and half years since China and Solomon Islands entered into diplomatic relationship, China has made important contributions to both economic development and social stability of SI. Our cooperation covers trade, investment, infrastructure, agriculture, education, tourism, climate change, policing, etc.. Action speaks louder than words. On April 22, 2022, I had the honor to handover the first fruit of Stadium Project, an international standard running track, to the Hon. Manasseh Sogavare, Prime Minister and Minister for 2023 Pacific Games. And I am happy to learn the running track is now used every week by Solomon Islands athletes for training.

For most countries, development and security are two sides of (the same) (bycoin, closely connected with and supported (by) each other. Economic development can only be achieved in a safe social environment. And security of a country is based on sustainable and equitable economic growth. On September 2021, President Xi Jinping proposed Global Development Initiative (GDI) at the UN General Assembly. The purpose is to galvanize worldwide attention to global development partnership, promote international cooperation, and lend fresh impetus to the realization of 2030 SDGs. Recently, President Xi Jinping proposed Global Security Initiative (GSI), with a new concept of security that can replace confrontation and zero-sum mentality with dialogue, partnership and win-win results.

As the permanent member of the United Nations Security Council and the second largest economy in the world, China is determined to play its role as a responsible major developing country. We have made great efforts to safeguard international peace and security and to explore the way forward for humanity. The GSI and GDI are inspired by the diplomatic tradition and wisdom with unique Chinese style. China always adheres to the path of peaceful development. China has never started any war, never occupied an inch of land of other countries, and never participated in or organized any military blocs. When it comes to peace and stability, China has the best record among major countries.

In terms of relations with PICs, China has no selfish interests, and does not seek “spheres of influence” or use bully and coercion. China will always be a constructive force for peace and development. Recently, there has been reports and comments about the security cooperation between China and Solomon Islands. As two sovereign and independent countries, China and Solomon Islands are committed to normal law enforcement and security cooperation on the basis of equality, respect and mutual benefit.

The Security Agreement will further strengthen bilateral cooperation between China and Solomon Islands in areas such as disaster response, humanitarian aid, development assistance and maintaining social order, to jointly address traditional and non-traditional security challenges faced by SI for decades. It will inject positive energy and certainties into the security environment of Solomon Islands and the region as a whole. It does not direct at any third party, and can complement regional structures. The sovereignty and independence of China and Solomon Islands should be respected.

The Pacific is shared home of all countries in the region, not anyone’s “backyard”. It can become a venue of international cooperation, not geopolitical competition. Justice is in the heart of the people.

It is crystal clear who wholeheartedly promotes peace and cooperation, and who seeks political gains and confrontation. The best way to work with PICs is to respect each other (to ensure) more tangible outcomes for the people.

By His Excellency Ambassador LI Ming