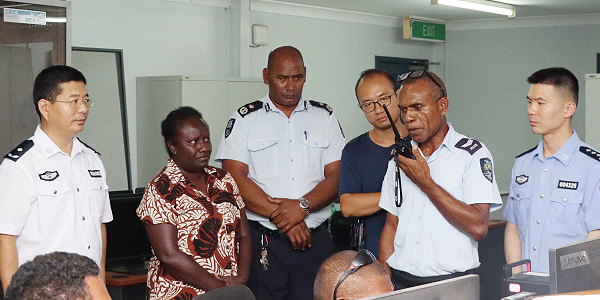 The officers simulated the use of VHF handset radios and vehicle radios in three scenarios: routine communication, emergency contact and point-to-point call, after receiving training from CPLT at the Rove Police Headquarters from 3 to 5 October 2022.

PS Karen on behalf of the Solomon Island (SI) Government and MPNSCS thanked the Ministry of Public Security of China for the timely and effective support to RSIPF in terms of this major cooperation.

Ms Karen was impressed by the new development we have in terms of enhancing capability of RSIPF. Communication is an important part of policing. Over the years, we have tried to resource communication capability within RSIPF, but we are slow and struggling. With the assistance of CPLT led by Commissioner Zhang, it’s really another step forward to modernize the capability we really need.

I appealed to RSIPF officers to take care of those assets. Share the knowledge and skills you have learnt with other officers at your place of work says PS Karen.

When SI entered diplomatic relations with Pupils Republic of China (PRC), one of the requests that the government had was to seek support in terms of resourcing RSIPF in communication capability. Today we witnessed the outcome of this new technology.

CPLT Team Leader, Commissioner Zhang said today’s brief and mock exercise is of significant importance for RSIPF because it marks the application of a new communication system, the digital VHF communication system which was assisted by the Ministry of Public Security of China.”

“In the coming days, CPLT will uphold the spirit of ‘professionalism, efficiency, inclusiveness, transparency’, for the purpose of friendship and goodwill to RSIPF, promote long and stable bilateral law enforcement cooperation between China and SI, boost the capacity and capability of RSIPF, support RSIPF to become the best police in the region, and make SI truly safe, prosperous and happy isles,” Commissioner Zhang said.

The system can be used by different departments of the RSIPF and police stations as it will enable police officers to communicate efficiently and effectively during their daily work and important operations. It is also a strong support for the command and control of the security of Pacific Games 2023.

The RSIPF officers are now familiar with the new communication system after the training and mock exercise. RSIPF officers expressed their gratitude to the CPLT and PRC engineers for the knowledge and skills taught to them.