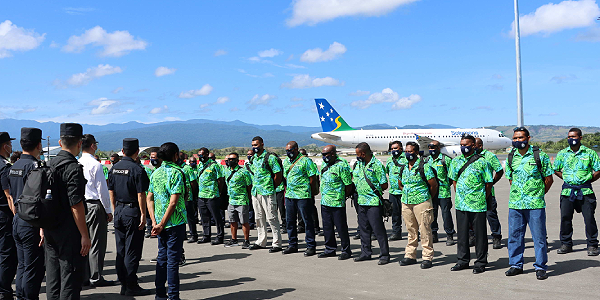 Most of the officers from the National Response Department of the RSIPF left the country on 8 October 2022 for a seminar on police techniques.

The Delegation was farewelled at Henderson airport by the Deputy Head of Mission Counsellor Mr.YaoMing from the Chinese Embassy to Solomon Islands and China Police Liaison Team (CPLT) headed by Commissioner Zhang Guangbao.

During the farewell ceremony, Counsellor YaoMing stressed that this is the first time for the Chinese to conduct professional police training for the RSIPF officers in China.

The Counsellor said that he hoped all RSIPF officers could exchange with their Chinese colleagues, improving better understanding of Chinese police, diversified Chinese cultures and friendly Chinese people.

Counsellor Yao said that after their return all officers would contribute more to the better cooperation between RSIPF and Chinese Police, and enhance the friendship between China and Solomon Islands.

CPLT Leader Commissioner Zhang recognised this RSIPF visit to China as a great milestone of the police cooperation between China and Solomon Islands.

Commissioner Zhange told the delegation that the Ministry of Public Security of China and the Chinese police prepared the seminar on police technique well and would give them warm reception and strong support.

Mr Zhang asked RSIPF officers to make good use of this opportunity to develop their knowledge in those well-prepared courses by Chinese police to enhance their capacity and capabilities during the trip to China.

DC Mr. Vaevaso expressed his great appreciation to the Chinese government for the generous support. The training is part of the police cooperation signed by People’s Republic of China (PRC) and Solomon Island Government which comes under the Police corporation program.

Mr Vaevaso said the training will enhance the RSIPF officer’s capability  further enhance RSIPF capability with some new lessons inserted to be part of the training with new tactics and skills set that officers will acquire and applicable to their duties upon their return.

Mr. Vaevaso said this is the biggest RSIPF delegation to visit a foreign country for professional police training in the history of RSIPF and believed that this advanced police training programme is crucially important for RSIPF to be developed as one of the best police forces in the region.

He urged officers for strict discipline and high standard performance from all members of the delegation. The training program is proposed by the RSIPF and it is a continuation of the police training programme conducted by CPLT in Rove Police Headquarters.

During the trip to China, the RSIPF delegation will receive further professional training courses and have opportunities to visit different police stations and departments in China to communicate with the Chinese police colleagues on their expertise in policing.