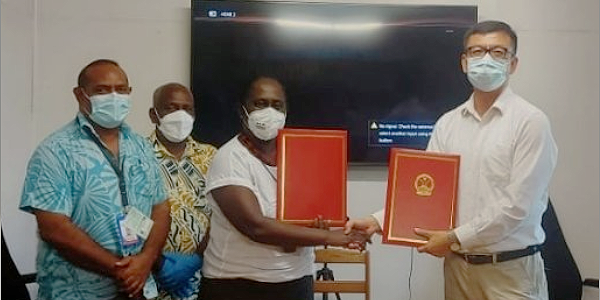 THE People’s Republic of China Embassy (PRC) in Solomon Islands will soon be constructing the proposed Comprehensive Medical Centre (CMC) at the National Referral Hospital after completing the project’s on-site feasibility study.

The statement said the minutes amongst others outlined the project size, list of medical equipment for the centre, details on the separation of roles and responsibilities between MHMS and PRC from the preparation phase to the project’s completion.

Last week’s signing led from initial discussions held two years ago by the government following the increasing demand and tertiary services for Non-Communicable related diseases, and the need to set up of a medical center dedicated to NCD related illnesses at NRH.

The MHMS statement said work will focus on setting up a cardiac centre to diagnose heart problems and provide treatment; this will later expand to include renal specialized services and treatment of kidney diseases with a more comprehensive medical centre to deal with a range of NCDs in the long term, hence the name, Comprehensive Medical Centre (CMC).

The new CMC will be constructed at the eastern wing of the National Referral Hospital.

At the signing last week Mr Yao stated that the project is one step closer to its next phase which is the actual construction of the complex.

He said China will ensure all components it agreed to in the feasibility study minutes is fulfilled.

Mrs McNeil also confirmed to China the ministry’s commitment to its part in the project.

She said this project will greatly bolster health care service in the country.

“Heart and renal diseases are amongst the leading causes of deaths in the country and thus the new facility with all proposed new medical equipment will greatly enhance health service in the country for our people.

“A big thank you to the government and people of China,” Mrs McNeil said.

Discussion on this facility was initiated in 2019 and in November 2019 the Government of the People’s Republic of China agreed to undertake the feasibility study.