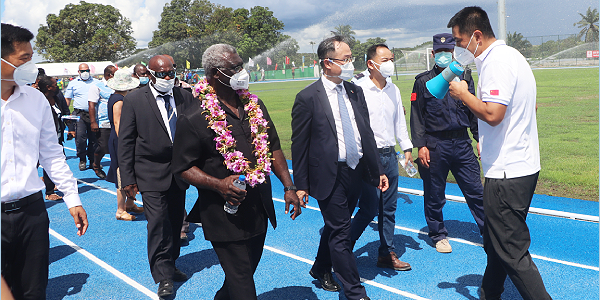 THE newly built Track and Field facility at the King George Sixth School former cricket field was officially handed over to the Government of Solomon Islands by the People’s Republic of China (PRC) yesterday.

This is the first of eight sports facility projects under the ‘Pacific Games Stadium project’ funded by the People’s Republic of China (PRC).

The handing over was done by the PRC Ambassador to Solomon Islands, His Excellency Ambassador Li Ming to the Prime Minister Manasseh Sogavare and by representatives of the 24 sporting federations in the country, members of the NHA, NSC, SINIS and members of the Government.

Speaking during the handing over H.E Li Ming said this is the outcome of the first Stadium Project for the 2023 Pacific Games.

“In May last year, I had the honor and privilege to accompany the Hon. Prime Minister Manasseh Sogavare to attend the ground breaking ceremony of the Stadium Project right here on the blessed land.

“At that time, there was nothing on the ground, only vacant land with wild grass.

“One year later today, we are gathered here again to witness the handover of the first outcome of the historic Stadium Project for 2023 Pacific Games.

“It is the brand new world standard practice track and football field on the ground under our feet now.

“We are walking one step closer to the Pacific Games,” he said.

He thanked and congratulated the Government and the CCECC for making this project a success despite the challenges faced by the Covid-19 pandemic.

“On behalf of the Chinese Government and Chinese people, we extend sincere congratulations to the Hon. Prime Minister Manasseh Sogavare, the National Hosting Authority (NHA) of 2023 Pacific Games and CCECC, the general contractor of the Project, for today’s successful handover ceremony.

“Time flies, many things happened in the past year.

“In spite of the COVID-19 pandemic, the riots in Honiara, the rainy season, and UXO work, the Chinese team worked hard and closely with Team of Solomon Islands and completed the first project according to schedule,” he added.

Yesterday’s handing over and a brief tour around the facility was concluded with a special exhibition, a mixed women and men 100-meter dash.