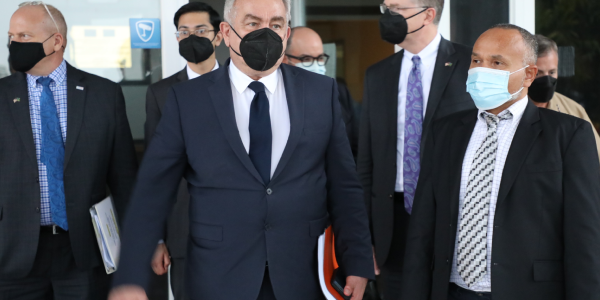 TOP United States security officials have arrived in Honiara in their efforts to force Prime Minister Manasseh Sogavare to scrap a security pact Solomon Islands signed with the People’s Republic of China (PRC) earlier this week.

The delegation is made up of Kurt Campbell, the US National Security Council Coordinator for the Indo-Pacific, and Daniel Kritenbrink, Assistant Secretary of State for East Asian and Pacific Affairs.

Unlike ordinary people who would require COVID-19 protocols, the delegation was whisked to the Prime Minister’s Office in downtown Honiara. There, they met with Mr. Sogavare.

The visit to Solomon Islands by the Americans is the latest in a flurry of joint diplomatic activities aimed at forcing Solomon Islands to abandon the security pact, falsely claiming China was going to use the agreement to build military bases in Solomon Islands.

The visit by the top level officials is the first in almost 80 years by senior American officials.

Washington DC, which has literally forgotten Solomon Islands since World War II, has finally woken up and is applying the heat on Mr. Sogavare to abandon the security pact, signed in Honiara 30th March this year.

Australia too has doubled up on its visits to Honiara in the past two weeks. The Australian Minister for International Development and the Pacific, Zed Seselja, made a “rare” visit to the Solomon Islands on Tuesday amidst an election campaign.

Minister Seselja’s visit followed the trip of two of Australia’s top intelligence chiefs to Honiara. The mission is the same – they are trying to talk Australia out of the security pact.

According to insiders, the meeting with Seselja last week did not go too well for the visiting Australian Federal Minister. “The resentment was quite obvious,” one said after the meeting.

Washington DC believes a “free and fair election could result in a new government that not only abrogates the security deal (with China) but switches back to Taiwan.”

The US Administration also believes such an outcome would be a “serious loss of face for Xi Jinping, giving ammunition to his domestic enemies, and could lead to a politically weakened Sogavare being more exposed to prosecution,” according to Reuters news agency and The Sunday Guardian newspaper.

Solomon Islands, an archipelago of some 700,000 people, in the South western Pacific has long been forgotten. In September 2019, Solomon Islands and the People’s Republic of China entered into diplomatic relations, a move which had sent alarm bells in both Washington DC and Canberra.

Now, the two Western democracies are playing a catch-up game. They are exploiting the ignorance of the local population in the hope of winning hearts.

The visit by Kurt Campbell, the US National Security Council Coordinator for the Indo-Pacific, and Daniel Kritenbrink, Assistant Secretary of State for East Asian and Pacific Affairs simply heightened the seriousness with which Canberra and Washington DC view the unfolding spectacle.

The visit will be one of the highest-level American visits to the Solomons, since 80 years ago, this August when US Marines landed on Guadalcanal, according to the overseas news reports.

According to Danny Phillip (former MP and Prime Minister), the USA has distanced itself from Solomon Islands over the past years.

He was quoted as saying the USA has totally forgotten Solomon Islands over the past 80 years after the vicious world war two (WW2) leaving tons of munitions, hazardous chemicals wastes and military hardware of various descriptions in the country.

“Our people have been killed in numbers annually by unexploded ordinance and other hazardous materials – a risk that still persists in most parts of Solomon Islands till today,” Phillip said.

Mr. Philip said, like other Melanesia countries in the pacific, Solomon Islands is the most volatile country with different culture and traditional beliefs and values which makes governance complicated and plain difficult at times.

“We struggle on ways of making our tribal land, our cultural values and systems to become more relevant to the requisite of more than economic development.

“This is often when our development partners left the issues for us to deal with it ourselves,” Phillip said.

Phillip stressed that the need for establishing a strong and effective internal security apparatus and system to underwrite and guarantee economic development as national assets is important.

“This alone is the basis for the expanded scope of security arrangement between Solomon Islands and China,” he said.