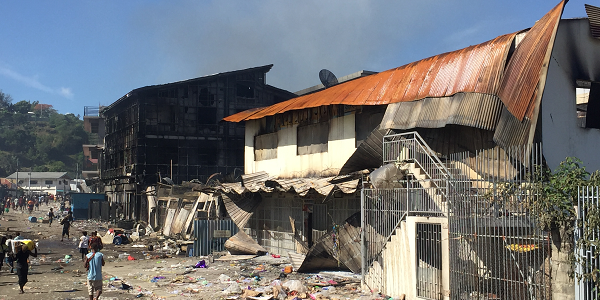 MANY Chinese individuals and families have lost everything and are also homeless following the widespread looting and burning of shops and properties last week.

This was the statement of Solomon Islands Chinese Association (SICA) this evening (Sunday 28th November 2021) as it condemns the unlawful events which had endangered many innocent lives since Wednesday last week.

“SICA condemns, in the strongest possible terms, the senseless widespread looting and burning of shops and properties that have endangered the lives of many innocent individuals and families, including the indigenous Solomon Islanders.

“Many Chinese individuals and families have lost literally everything and are also homeless,” SICA said.

The association said indigenous Solomon Islanders will also be heavily affected through loss of employment, and lack of timely supplies for their businesses and canteens.

“The majority of Solomon Islanders are friendly, caring, easy-going and peaceful people.

“The criminals who loot and burn are but a very small minority of the country’s population,” the statement said.

The association on behalf of the Chinese community then thanked the many peace-loving Solomon Islanders who have offered their support and sympathy during this difficult time.

“The bravery of the RSIPF, PRT, securities, Chinese individuals and friends of the Chinese community are recognized and acknowledged.

“These organisations and individuals risked their lives to protect other community members and properties from criminals, and SICA will forever be grateful for their help,” the statement said.

SICA also thanked the Government for their continuous support in helping to rebuild businesses and support the Solomon Islands’ economy and also the governments of Australia and Papua New Guinea.

“The support from the governments of Australia and Papua New Guinea in assisting the RSIPF to stabilise the situation and provide security is deeply appreciated,” SICA said.

The association encouraged all Chinese owned and operated businesses to continue operating in an ethical and fair manner; respecting and abiding by the laws of the country.

SICA said SICA and the Chinese community are confident that no matter how difficult or long it will take, they are looking forward to a brighter Solomon Islands.

Meanwhile, Chung Wah School which is located inside China Town has announced that the school will close on Monday 29th November 2021 until further notice.