You are here:
Features - ReligionNewsNews - Business 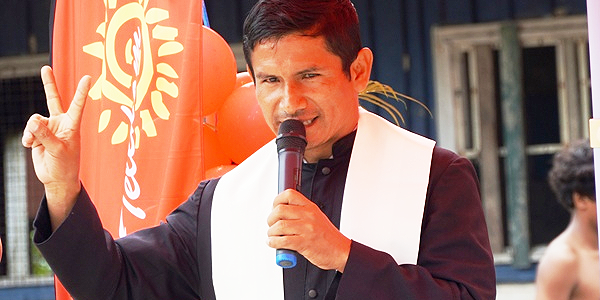 CHURCH leaders on Wagina, Choiseul Province have welcomed the upgraded telecommunication service offered by Our Telekom to the people and communities on the island.

Speaking at the officially launch of the new 3G tower and the service recently, Head of the Catholic Church on the island Fr Humberto Villa said, having an improved communication service on the island will benefit many families and communities to communicate with their loved ones no matter where they live.

However, he warned that its important to use the devise wisely because it can also bring problem to families and communities.

“In the United States many people had to seek help and counseling from doctors because of problems associated with overusing the device.”

A Seventh-Day Adventist (SDA) Church Pastor looking after the only Adventist church on the island, Pr Barton Jilini said, having an upgraded telecommunication services on the island has made it easier for many people to communicate with their loved ones.

He said, in the past many of the people would have to walk long distance to catch the only 2G tower to communicate.

“Now, the coverage has improved and villagers can communicate with their loved ones working and living overseas,” he said.

He added, with access to internet, missionaries like him can get latest updates from around the world and can also communicate with their church officials at the head office.

“We can also send our reports via emails to our church head office rather traveling long distance.

“Having a much better communication access also helps to improve our missionary work on this island and makes communication with the outside world much easier,” he said.

He also acknowledged the need for parents to take the responsibility of controlling their children when it comes to using the devise.

Our Telekom last Tuesday launched a new 3G tower opening up the island to the world-wide-web.

Now villagers can interact with their loved ones and friends through the social media.