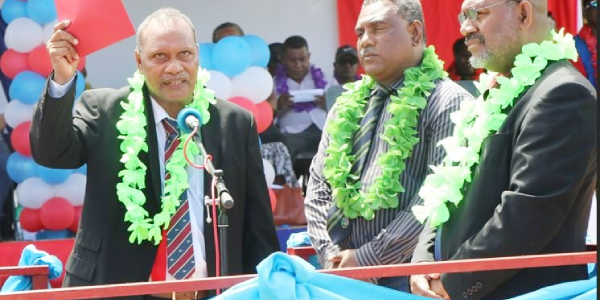 THE 28-day notice put up by the Malaita Provincial Government (MPG) as the deadline for the national government to respond to its 15-point log of claims has lapsed without any response from the Prime Minister’s Office.

The deadline put by the Malaita provincial government for the national government to respond to the log of claims lapsed on Monday this week without any response.

This paper was informed that the current Democratic Coalition Government for Advancement (DCGA) tried to avoid receiving the log of claims in the first place when Prime Minister Manasseh Sogavare refused to attend Malaita Province’s 39th Second Appointed Day celebration in Auki on August 15.

Premier Suidani was expected to hand the log of claims to the Prime Minister then but his absence prompted the premier to present the claims to Mr Pirione and Mr Mae. This was because the Prime Minister failed to send any of his Cabinet Ministers to represent DCGA at the event.

To this day, it is not clear if the two permanent secretaries have already handed the log of claims to the DCGA.

However, one thing that is clear is that the Sogavare-led DCGA Prime Minister is yet to respond to the claims after the deadline lapsed on Monday.

One of the points raised in the log of claims was for the 2023 National General Election (NGE) to be held at the constitutionally scheduled time, a demand the DCGA government has already turned a blind eye to with its passage of the Constitution (Amendment) Bill 2023. This means the 2023 NGE will now be held in 2024.

If DCGA responds, it will only respond to 14 other points as one of the points raised in the log of claims has now been technically erased.