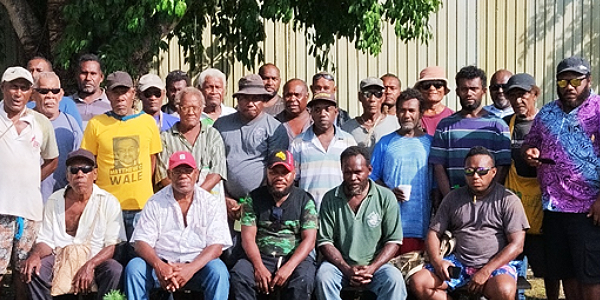 THE initiative of setting up a Tolo Wala Council of Chiefs Constitution (TWCOC) reached a milestone with the approval of the draft constitution.

The Ministry of Traditional Governance Peace and Ecclesiastical Affairs (MTGPEA) in collaboration with the Aoke-Langalanga Constituency and Local Court approved the draft following a successful consultation last week.

According to a statement released by MTGPEA, the TWCOC is a legal frame work to empower chiefs under the body.

“The Legal frame work will enable tribal chiefs being institutionalized, manage and regulate their traditional governance system, promote and preserve traditional values and practices, codify their traditional laws, and to empower them to engage with government and other development partners in terms of social and economic matters.”

“Chiefs from TWCOC have learnt a lot from the one-day consultation which covered many areas related to preserving traditional cultures and arts, conservation, traditional settlement, traditional laws and their importance.

“The consultation was graced with presentations on the importance of Preserving Traditional Cultures and Arts, Traditional Settlements, Conservation, the Importance of Land development and Traditional Laws for Social Cohesion.”

During the consultation chiefs were briefed on the Traditional Governance Bill and Local Court System and a detailed presentation on the draft Tolo Wala Constitution.

A statement from the MTGPEA in Auki said, “The Ministry of Traditional Governance, with its pending ‘Traditional Governance and Custom Facilitation Bill’ acknowledges the Initiative taken by the Aoke-Langalanga Constituency leaders for strategically organising their traditional leaders to be formally recognised.

“This is because traditional leaders are almost out of picture and sometimes doing things without being formally recognised.”

“Aoke Langalanga is a gate way constituency and this constitution will enable and guide them revive and apply custom as the foundation to help them in social cohesion, land settlements and most importantly, empower their people in social economic development.”

“Furthermore, the Chiefs Constitution aligns and links well with the Traditional Governance and Custom facilitation Bill.

“Tolo Wala council of chiefs includes Kwara’ae and Langalanga Tribal and Clan Chiefs, who share common land boundaries, heritage, cultural values and practices. Their Chiefs Council therefore, is composed of Two Houses of Chiefs namely, The Tolo House of Chiefs and the Wala House of Chiefs.”

“The one-day consultation also saw the appointment of an interim committee comprising 10 members from amongst the Tolo and Wala traditional leaders. This was also a very important step as there are very important matters yet to be addressed in order to bring the role of their respective Houses of Chiefs to the forefront of future activities,” the MTGPEA statement said.