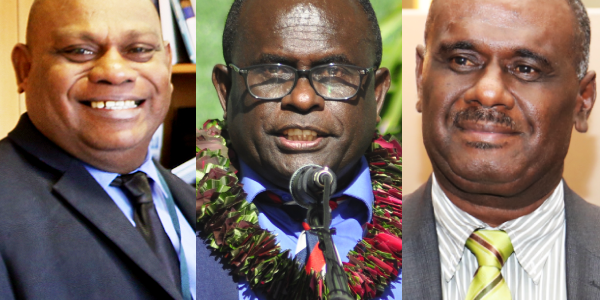 THE ruling Coalition Government has launched its secret weapon in a bid to defer the National General Election next year, telling voters the Government has already completed consultations on the matter with Premiers, Churches and the Solomon Islands Chamber of Commerce and Industry (SICCI).

Solomon Star has obtained a copy of the 19-page dossier called DCGA CONSTITUENCY AWARENESS INFORMATION PACK 2022. Much of the document is filled with deception, capitalizing on the ignorance of rural voters.

Designed for rural voters, the document gives the impression that only the DCGA government would complete major projects such as 2023 Pacific Games national stadium and associated facilities.

At least three Ministers have begun their campaign. They are the Minister for Commerce, Industry, Immigration and Labour and MP for South Vella Lavella, Hon Kologeto, the Minister for Environment and East Kwaio MP Stanley Festus Sofu, who conducted his awareness at Kobiloko yesterday afternoon.

Foreign Affairs Minister and MP for Hograno-Kia-Havulei on Isabel, Jeremiah Manele, was reportedly due to visit his Constituency this week. Other Ministers and backbench MPs would follow suit in a campaign that is certain to cost taxpayers tens of millions of dollars.

“The main rationale behind the deferment of the 2023 National General Election is that we will be hosting the 2023 Pacific Games in the same year.

“This will need a lot of financial and logistics support,” the document, prepared by the Office of the Prime Minister, said.

The Government document also pointed out that registration of voters had not started.

“We need to update the voters’ list, otherwise a huge number of our people will not vote and we will be denying them their constitutional rights,

“The current voter list is nearly five years old (and) a lot of our people have turned 18 in the past five years. Dissolving Parliament earlier to hold an early election will deprive those people of their rights to vote,” the document said.

It also pointed to the effect of the global pandemic has also affected our economy.

“The recent riot which incurred a loss of $800 million has also affected our revenue collection.  We need money to do our registration.

The document which also canvassed issues in other sectors, implied that only the DCGA government had the capacity to complete all the projects it had started since taking office in 2019.