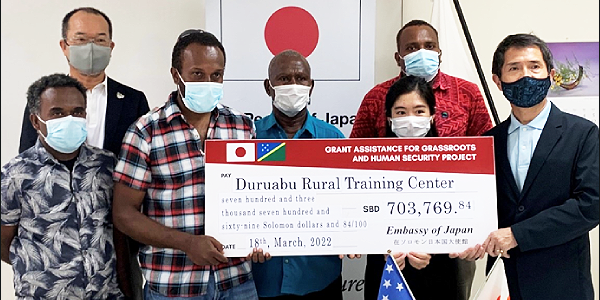 THE Embassy of Japan on Friday donated SBD$705,000 grant support towards the Project for Construction of Classroom Building for Duruabu Rural Training Center (DRTC), Malaita Province.

Witnessing the donation ceremony were representatives from the Duruabu Rural Training Center and officials from Japanese Embassy.

He said their support of building a new classroom will improve the educational environment for DRTC.

He explained the assistance will enable the training center to provide effective technical and vocational education to the local youth.

“Vocational training is playing a vital role as an integral part of human resource development and overall national economic growth in Solomon Islands.

“Therefore, we strongly hope that appropriate educational environment provided by the training center through this grass root project will give the local youth opportunity for quality employments and contribute to the socio-economic development of Solomon Islands,” Mr. Norimasa said.

He emphasized one important point of the project is participation and contribution of communities.

With their commitment to training center, they are confident that the project will be successfully and smoothly carried out and reach the ultimate goal.

He added he hope that this project will be remembered as a symbol of friendship between the people of Japan and Solomon Islands in years to come.

said on behalf of DRTC he thanked the government and people of Japan for the approval of their project proposal.

He said according to the Center’s three year Development Plan (2019-2021), the event is not an accident, as one of their major obligations is to seek donor assistance and support.

“And we are grateful that the government and people of Japan through the GRASSROOTS AND HUMAN SECURITY SCHEME has come to our rescue with regards to our quest,” Mr. Siofa’a said.

He said the reason for this project and the problem they are trying to solve is the enrollment of the institution currently indicates a genuine need for four additional classrooms to be built.

He revealed since establishment of the center, the annual registration signifies an unstable increase in the number of enrollment year after year.

“The school dropout data of almost 70% from five neighboring schools in the formal education segment further proved the desire to establish this classroom project.

“Our national data for intake into the formal education stream after the national examination years showed a competitive enlistment and to a certain extent nepotism and greed had evidently sidelined many prospecting students with no placements all year round,” Mr. Siofa’a said.

He added this had been a sad sympathetic incident that with the upgrading of training center will only resort for the victims.

He made assured with the project’s approval the DRTC community is more than prepared and willing to render its full support for the project prior to and right all throughout its implementation and completion phases and prepared to fill the gap should there be any shortfalls.