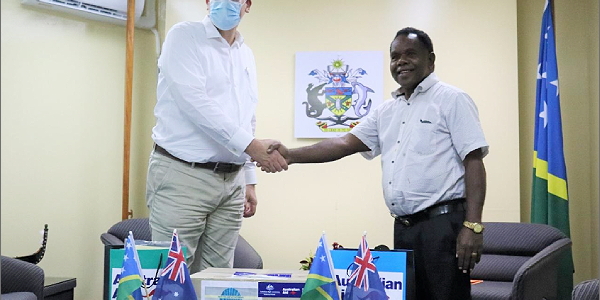 The equipment, including audio headsets, wax sticks and heavy-duty embossing materials, will strengthen the capacity of staff from the ICT and procedures departments to carry out their work. These teams play a vital role in keeping Parliament running, including producing official records and formally sealing new pieces of legislation.

Requested by the National Parliament of Solomon Islands, the equipment was facilitated through the Pacific Parliamentary Partnerships Fund, with the support of Australia’s NSW Parliament.

The National Parliament of Solomon Islands and NSW Parliament share a 14-year twinning relationship. Through this program, both parliaments engage in two-way exchanges, training opportunities and workshops, and share lessons learned.

This partnership reflects Australia’s and Solomon Islands’ shared commitment to good parliamentary governance. A strong and well-resourced parliament is the bedrock of a healthy and thriving democracy.

In a small handover ceremony, the Deputy Speaker of Parliament, Honourable Commins Mewa, thanked Australia for its continuous support to the National Parliament:

“This is not the first time we have received support from the Australian Government. Thank you so much Australia”.

He urged parliamentary staff to take care of the equipment as they carried out their work.

In handing over the equipment, the Australian High Commission’s Political Counsellor, Kevin Playford, expressed Australia’s delight at delivering the equipment.

“Australia will continue to support Solomon Islands as a true friend and neighbour”.