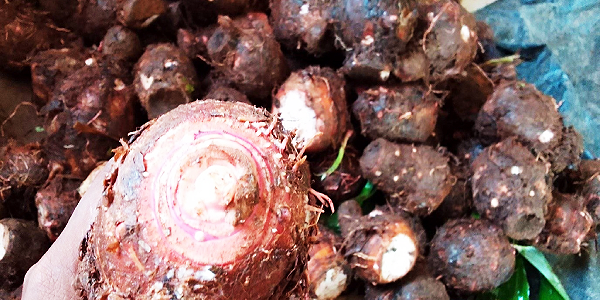 TARO farmers in Malaita Province are now benefitting from the purchase of their crops by a local taro-buying company- GOSHEN Enterprise.

Goshen has already commenced buying taro from its registered Taro farmer Association partners in the province.

With its recently opened Taro Pack House in Auki and another in Gwaigeo due to be completed soon, the company now has its eyes on both the domestic and international markets.

Goshen Enterprise has partnered with more than ten Taro Farmer Associations in Malaita to provide it with a constant and steady supply of the root crop.

Last month, the company recorded a high supply of taro products at its buying centre and just early this week, one of its Taro Farmer Association Partner in Central Kwara’ae traded in 177 kilogrammes of taro and has fetched itself a handsome return.

A spokesman for the Central Kwara’ae Taro Association told this paper that the market provided by Goshen is a good starting point for taro farmers in the province.

He said the taro buying point provides a reliable avenue for taro farmers to sell their taro crops, unlike before when they had to travel all the way to Honiara.

“With the establishment of Goshen Enterprise, we the taro farmers in and around Auki now have access to a reliable market. We do not have to spend money to travel to Honiara to sell our produce,” the excited farmer said.

Mr Maesimae said the Gwaigeo Taro Pack House is expected to boost their taro market and with this additional taro buying point, they are looking forward to launch into the international market as they have planned.

“As soon as this second pack house is complete, we will go on with our plan to export our different taro products,” Mr Maesimae said.

The SBD 1.3 million Taro Pack House was fully funded by the Enhanced Integrated Framework (EIF) through the Solomon Islands – Enhancing Capacity for Agriculture Trade Project (SI-ECAT) at the cost of SBD$1.3-Million.

The EIF is a multi-donor programme which supports Least Developed Countries (LDCs) in their efforts in promoting economic growth and sustainable development by addressing trade and trade-related constrains in order to build capacity to trade and take advantage of global trade.