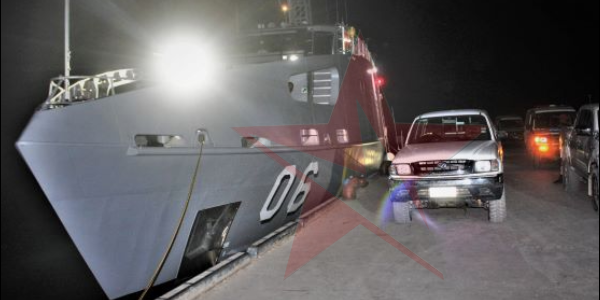 THE arrival of Patrol Boat Taro, in Auki Malaita Province on Saturday night has triggered mixed feelings amongst the Malaita public.

Patrol Boat Taro left Honiara on Saturday afternoon and berths at Auki Wharf at around 7pm on Saturday night after a short trip to maintain law and order in the Malaita’s provincial capital, it was revealed.

When the news about Patrol Boat’s trip broke out on Saturday afternoon, it shook Auki town as many people flocked under the cover of darkness to witness its arrival at Auki Wharf.

Many were of the view that the big police contingent are in Auki purposely to carry out DCGA’s wish to arrest top Malaita leaders.

Two failed motions of no confidence against the MARA government; in 2020 and 2021 were believed to have the backing from the DCGA government.

Many Malaitans viewed the arrival of the Patrol Boat Taro in Auki as an act of intimidation from the DCGA government to try and intimidate the MARA government leaders and its strong supporters.

Information reaching Solomon Star Auki claimed that Malaita public is on alert mode following the arrival of Patrol Boat Taro where some said if the Patrol Boat is here mainly to arrest MARA leaders then they better rethink that decision.

Solomon Star Auki was told that members of the public set up two roadblocks on Saturday night; one along the South Road, the other along the West Kwara’ae Road, to try and catch those who supported the DCGA government who were believed to be behind the plan to arrest top MARA leaders.

Pundits said the issue between the MARA government and DCGA is still active and fragile and the presence of Patrol Boat with foreign police in Auki could further provoke the situation to deteriorate.

“The idea of sending Patrol Boat Taro to Auki with 60 police officers including foreign police was from the Police Headquarters in Honiara,” one source within the Maritime Police said.

According to Auki Police Operational Commander Inspector Michael Ramosaea the Patrol Boat will be here for three days.

Inspector Ramosaea said they were here mainly to assess the situation in Auki after the standoff between Ex-militants who supported the DCGA government and an angry mob who did not want to see Ex-militant supporting DCGA to intimidate the MARA government.

The Ex-militants after being halted and harassed in Auki, Thursday last week held a meeting at Faumamanu in East Malaita where they threatened to retaliate and remove the Malaita Premier from office.

It is understood that apart from transporting a big police contingent to Auki to maintain law and order, the Auki Correction Commandant   Lawrence Meke confirmed that Patrol Boat Taro also transported six inmates who were transferred to Auki Correctional Center.

Two of those inmates were mentally ill where he said they will be transferred to Kilu’ufi for medical check-ups.

The situation in Auki town is quiet, but tense since the arrival of Patrol Boat Taro.

The Patrol Boat Taro is expected to leave Auki this week, but it is not clear if they are going to make any arrests.

According to police, the Patrol Boat is here as part of police normal duty to maintain law and order and not to cause panic and disturbance as many assumed as police always operate on neutral grounds.

In the meantime, those who wish to see law and order maintained in Auki have welcomed the arrival of the Patrol Boat.