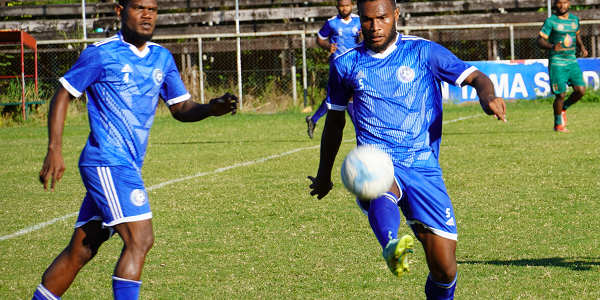 THE first of two playoff matches between Central Coast FC and Solomon Warriors FC for the OFC Champions League playoff is set for Sunday June 19th at the Lawson Tama.

Both Coast and Warriors have been gearing up preparations towards these playoffs with friendly matches played against other TSL clubs in the past weeks.

These friendly matches are the first matches both clubs have played since the lifting of the State of Public Emergency (SoPE).

The objective of these friendly matches is to help coaches gauge the fitness level and performances of their teams since both teams have had a few new signings.

Both clubs have recruited a few new players to their ranks.

The second and final playoff is scheduled for June 29th.

The playoffs will mark the return of Oceania’s flagship club football competition, the OFC Champions League, which will decide who represents the region at the 2022 edition of the FIFA Club World Cup™.

The revised competition format, which was adapted in the wake of the COVID-19 pandemic to reduce travel requirements on teams, is split into two phases.

Stage one will determine which clubs contest stage two, which will be an eight-team centralised finals tournament scheduled for August this year.

Solomon Islands, Fiji, New Caledonia and Vanuatu will stage home and away playoffs – involving the champion and runner up from their respective national league – through June, from which each winner will secure qualification to the finals tournament.

Papua New Guinea and Tahiti meanwhile will each host a single leg match between their national league champion and runner up, also in June, to decide their representative.

New Zealand Football has already selected Auckland City FC as their representative for the finals tournament.

The club champions of American Samoa, Cook Islands, Samoa and Tonga are scheduled to play each other in a centralised qualifying tournament to decide who takes the final qualification spot, with details still to be confirmed pending border restrictions.

Livestream coverage of all OFC Champions League 2022 National Playoffs will be provided.